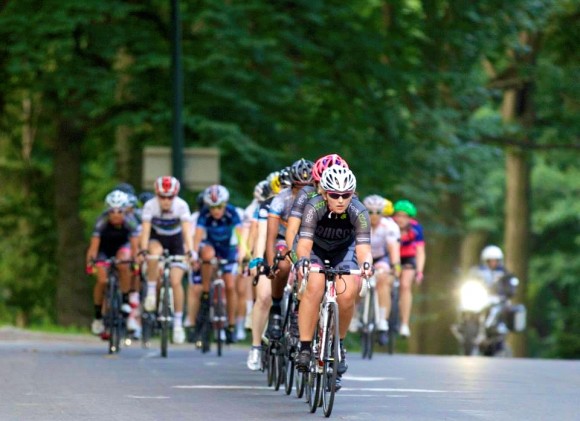 CRCA’s Intro to Racing Clinics have always been a great way for men and women to give bike racing a try. As this program has become more popular in recent years, with events near selling out, CRCA has decided to put on two sets of clinics in 2015 (Spring & Summer for both Men & Women).

On an unexpectedly brisk spring morning, approximately 30 women showed up for the first of two women’s race clinics put on by CRCA. These clinics are designed for first time bike racers as well as women who may have done a race or two, but are really still trying to figure it all out.

After picking up numbers and getting them pinned on correctly (with some help), riders gathered for a pre-race safety and pep talk. CRCA coach Tara Parsons and CRCA life member and experienced racer, Nico Leon Moser, who was coaching the Men’s clinic, gave the debrief.

They discussed riding safely in a peloton, such as no sudden movements to slow down or move laterally, not overlapping wheels, and keeping your eyes up scanning the road and the other riders in front of you. They also discussed that it was important for each rider to make their own race, and try to be an active racer rather than a passive racer, even if you are not in the main field. Are there other riders nearby that you can get together with in order to work as a group and catch other riders? Don’t give up! You never know what has happened in front of you, and you could very well catch back up to the leaders. Remember, that if you are suffering, most likely other riders are too, and the pace will usually ease up. Try to push the little extra bit in order to stay with the group. It is always easier to ride with a group than by yourself.

They also primed riders on the importance of staying out of the runner’s lane, and how to safely neutralize in the event of another field passing. The experienced racers who were riding along with the clinics would also be able to assist and encourage new racers during their race. Having the experienced racers be a supportive element in the clinic is one of the most important aspects of the CRCA race clinics.

The group of women stayed together through the first climb of Harlem Hill, and then remained relatively steady through most of the first lap. Riders began to be active by attacking and trying to get away going into the second lap. These included attacks by Gwynna Smith, Lisa Hom and Jenny Lin. Kristen Pederson, Gwynna, Elena Stojanova, Kaley Bell, and Vanessa Nirode rode well, monitoring the front of the peloton, putting in strong pulls. Carla Clifford attacked on HH and got a gap. At first, it seemed like no one was going to chase, but then Kyra Wolf and Gwynna Smith worked to hunt her down, with Kyra getting up to her wheel. Gwynna was tenacious though, and continued her hard work at the front, with an attack that created a gap from the field and had her chasing alone. At that point Angela Taylor worked to bridge her way to Gwynna’s wheel, and the two of them traded pulls, closing the gap on the leaders. With one lap to go, Angela gapped Gwynna on Cat’s Paw hill, and almost bridged to the two breakaway companions who worked flawlessly together until the end of the race. Angela had some bad luck descending Harlem hill though, and dropped her chain. After some initial panic, Angela was able to pedal her chain back on with some coaching! This did not happen quickly enough and the field soon caught her, with Gwynna leading the charge. There were a few more attacks and attempts at re-shuffling, but the two ladies out front, Carla and Kyra, stayed away, with Carla taking the win, and Kyra coming in second. From the main field Gwynna, who had done so much work throughout the race, dug deep for one last effort and took the field sprint for 3rd, with Kaley Bell and Stephanie Henry rounding out the top 5. Further back in the race it was reported that riders worked well together trading pulls to put in strong finishes themselves. Great job to all the ladies! 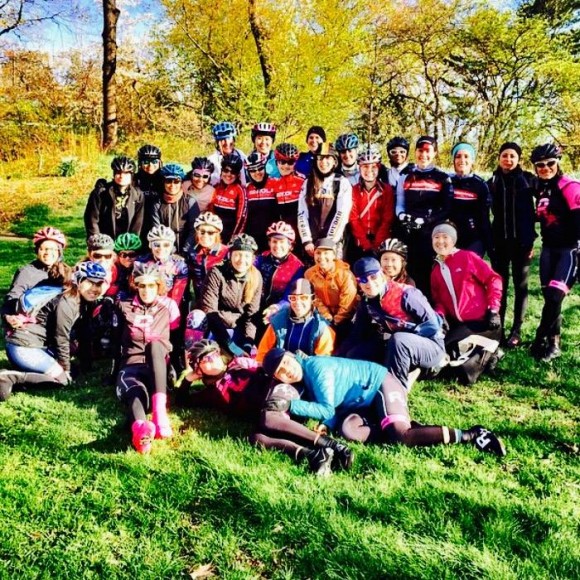 It’s a nippy early morning in Central Park as I ride up to the registration line. The small area is packed with both familiar and new faces. Coach Tara and Nico round up the men and women’s clinic participants just off the start line to give us our instructions. “Be safe, try different things and most of all enjoy yourselves”. Got it, now let’s race!

We all get rolling off the line, the pace quite civil, as we ride neutral till the top of Harlem Hill. My teammate, Adam is nowhere to be found, boxed in the sea of riders, no doubt. I keep the inside line as we approach Harlem Hill and keep towards the front on the descent. Coach gives the signal to race and we’re off! The race gets underway and it’s pretty clear everyone came with their game face on. We start to form a line as we traverse the west side sisters. The group waits to see who will make a move. I was lucky to have my teammate Adam in the group, so I stay towards the front but let the eager ones pull.

Once the first lap is over, I attacked on Harlem Hill on lap two to see who would chase and to set myself up for the sprint and pick up some extra prizes. It seems my attack works as we drop a few riders but I get caught before the transverse and I sit in to catch my breath.
Near the boat house I decide to open up my sprint. I get caught out to my left by another rider and he takes the first prize. We sit up and wait for the field to catch us. It seems we have opened up quite the gap with 4 riders at this point. I try to organize our line so we can make the break stick but nobody is willing to pull so we get caught before Harlem Hill. I am content to sit in the field. As we approach 59th st we get neutralized by the passing B field with nearly a couple of turns left till the end.

I bide my time and jump on the pedals once we’re clear. Adam, my teammate, reads the situation and catches up to me and pulls me to the bottom of cat’s paw. 4 others and I open up to sprint. I’m giving it my all. I sense someone on my right but I manage to hold them out till the very last second, but get taken from the left. I come in 3rd. At this point I’m ready to lie down as we pull over and start walking back to the start. Well this was fun! When do we do this again!? (UPDATE: Val just got his Cat 4 upgrade!) 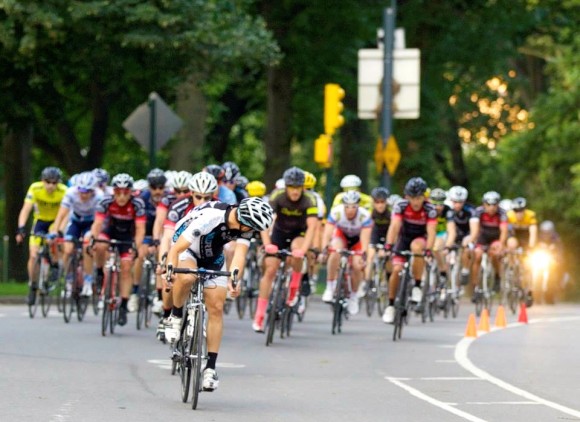 Well done to all new racers!

Our second set of Intro to Racing Clinics will be held on Sunday, June 21st.

There will also be an Info Session open to all men and women Clinic participants or anyone else looking to learn more about bike racing and hoping to meet other new and experienced bike racers: https://www.facebook.com/events/1594803200784767/.
Tuesday June 16th, 7:00pm @ Rapha Cycle Club NYC, 64 Gansevoort St.

Hope to see you all there! 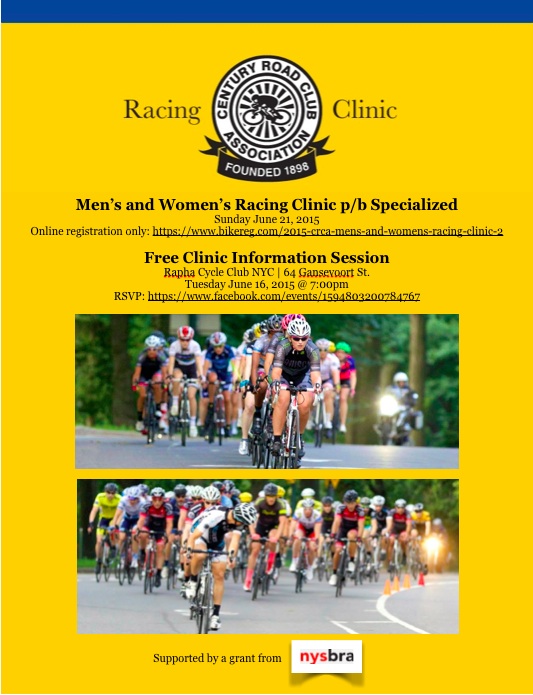