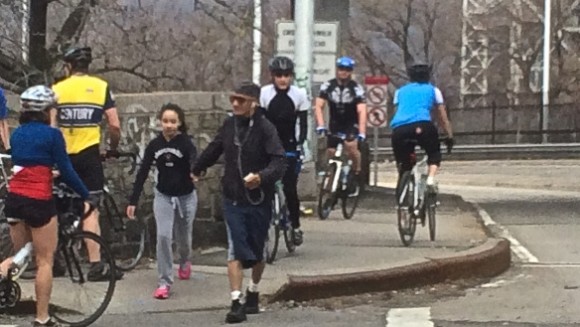 The President of New York Cycle Club, NYC’s largest recreational cycling club, Neile Weissman, has headed up an advocacy effort to convince the Port Authority to expand the bike/pedestrian paths on the George Washington Bridge during the upcoming $1 billion, 10 year recabling project, when the existing paths will be ripped out and reinstalled. CRCA members should be aware of the Port Authority’s plans and about the future work that will undoubtedly affect each of you. Please take a moment to read the summary of the project and ongoing advocacy efforts below, provided by Neile Weissman. If you would like to get involved, please reach out to Neile directly.

Along with other advocates, NYCC has already succeeded in convincing PA to make various improvements, including building new approaches to the paths and adding anti-suicide barriers to save lives. These improvements are extremely important.

But the Port Authority’s current plan will likely be insufficient to accommodate the increasing crowds of cyclists and pedestrians on the bridge. The overcrowding we all experience already, especially on warm weekends, will only get worse in the years ahead. The ideal time — if not the only time — to expand capacity for cyclists and pedestrians is right now. Once the bridge is rebuilt, that opportunity will be lost.

PA’s Plan will not remedy the paths’ blind turns, a source of frequent conflicts.

I am writing to let you know of three recent developments that, coupled with sufficient community demand, could sway the Port Authority to fulfill USDOT expectations that transportation agencies upgrade bicycle-pedestrian facilities on bridges during major renovations and for a cost well within what USDOT deems reasonable.

1) In December 2014, Manhattan Community Board #12, representing some 200,000 residents near the GWB, voted unanimously to call on the Authority to “build out the paths comparable to what now exists on the Williamsburg Bridge.”

2) In January 2015, Port Authority engineers evaluated a Cyclists’ Proposal for expanded and divided GWB bike/ped paths and found it to be technically feasible. The main obstacle, they said, is that “other projects require funding”. (Which begs the question: When will come a time that other projects don’t require funding?)

3) Then, in April 2015, New York Road Runners also signed on to support the Cyclists’ Proposal. 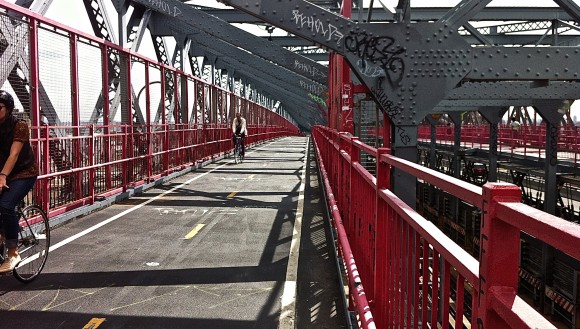 With the engineering timeline for the recabling drawing to a close, we will either get approval for an adequate bike/ped facility now — or never.

Accordingly, I ask for your support in:

Below are some links where you can find more details on the proposal. Please reach out to me if you have any ideas or questions to discuss.

I hope I can count on your support at this crucial time.