How to Start a New CRCA Sub-Team: Tips from Matthew Vandivort of Team Sixcycle-RK&O 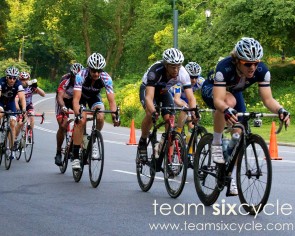 Matthew Vandivort (at the front)

Matthew Vandivort started Team Sixcycle-RK&O in the 2012 season, forming it primarily out of racers who had ridden at some time for the NYVelocity Development team. We asked him for some tips for others thinking of starting a new sub-team.

Tips on Starting a CRCA-Subteam

Links for following up:

Fall is a good time to start getting your members and sponsors/sub-sponsors together. Personal contacts of team members with potential sponsors/sub-sponsors are often the best place to start. You want to have these lined up in the Fall, if you can, to be able to design a CRCA-subteam kit and order in time for the coming season (see below on delays in clothing orders that often come during crunch time just before season start).

You don’t have to have enough sponsors to pay for all your kit. Some teams do just fine with a sponsor or two (ideally including a bike shop sponsorship that provides a discount!) and having team members pay for the kit they wish to use.

The CRCA Sub-team application can be found here.  To complete it, you need, at a minimum, to have a team manager with contact info (both phone and email), any info about sponsor and sub-sponsors that you have gathered, and a list of team members. This application is usually due in mid-February at the latest to the Director of Teams (teams[at]crca.net).  Team duty must be agreed upon by the beginning of April.

See the application for details about team composition and responsibilities. All team members must be members of CRCA, with at least half of the team being racing members (less than half can be associate, non-racing members of CRCA). Moreover, each member must list CRCA on their license. There are additional requirements in the application about such things as the CRCA logo on the jersey, team responsibility to make sure each member marshals, etc.

Andrew Shapiro, who started the Bicycle Planet CRCA Subteam in 2012, adds that it is important to fully educate members/potential members of the sub-team on the importance of fulfilling marshaling and team duty responsibilities, especially if they have not been prior members of CRCA. As he puts it, “It’s not an enjoyable task to have to monitor teammates for their marshalling duties and to handle suspended riders.”

One other important requirement is that all sub-team members must wear the same sub-team jersey in races (with the CRCA logo at the proper place). Several companies provide different options for developing team kits. A few prominent options include Champion Systems, Louis Garneau, Verge (or V-Gear), Capo Custom, Zoca and JLVelo.  These and other companies usually are hit with a large bulk of orders just before the racing season. This produces delays in providing clothing so that your team might not have kit to race in in March, April or even May. Work ahead, if you can, in designing and ordering so that you can have at least some kits to race in at the outset of the season. There often can be a good bit of back and forth with company designers in finalizing the design, so factor that delay into your timeline for ordering!

August 27, 2012
CRCA’s Ann Marie Miller Wins Two Rainbow Jersey’s at the World Masters ChampionshipsCall for Nominations for the 2013 Board
Sponsors