Following on a win of the Aug. 12, 2012 edition of the Tour de Fair Haven earlier this month, CRCA’s coach and longtime member Ann Marie Miller of the CRCA Eumeaus-Fuoriclasse Team won both the TT and Road Race at the UWCT World Cycling Tour Finals (formerly the World Masters Championships) in Pietermaritzburg, South Africa. The following is a slightly shortened version of her race report on how she won the two rainbow jerseys.

When John Eustice encouraged me to do the Berkshire Cycling Classic on May 6, 2012, little did I think I would end up in South Africa for the UWCT World Cycling Tour Finals in August!

John had invited me to be a cycling “ambassador” for the inaugural Berkshire Cycling Classic in Lenox, MA, and I was all too happy to help him out, since John has been such a great race promoter here in the Northeast, not to mention he was instrumental in helping me get started in racing.  I qualified for the UWCT World Cycling Tour Finals at that event, and I was intrigued to learn the Finals would be held in Pietermaritzburg, South Africa.

The UWCT World Cycling Tour Finals, an official UCI event, is the final event in a series of world-wide competitions and consists of the World Masters’ Championship Time Trial and Road Race.

I flew out from JFK on August 19 with 3 other local cycilsts from Westchester County, Jodee Novak, Kate Marshall and Meg Cea, as well as Jodee’s husband, Ed Novak, who was not racing, but brought his bike and helped with support for our races.  Since there was both a Time Trial and a Road Race, I brought both my Road Bike and my TT bike.  Anyone who has flown with bikes post-9/11 knows the hassle of flying with a bike box; I just prayed my bikes would arrive undamaged.

My bikes did arrive just fine, and we got acquainted with the area by doing the Mt. Verde Road race a couple days later, a hilly 7.6 mile loop through the Mt. Verde Estate. We then spent the following day on a re-con of the 15.6 mile loop of the Time Trial Course.  We also rode the 5 mile climb on the way back to Pietermaritzburg that was part of the Road Race course.  I noted that the 5 mile climb would probably make the selection in the Road Race, if the field was still together at that point. 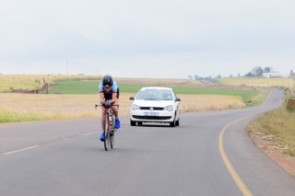 The next day, Thursday, Aug. 23, was the Time Trial.  Conditions were just about perfect for a Time Trial; fairly cool in the morning, with partly cloudy skies and only a light wind. I started with only last year’s World Champion, Marti Valks of the Netherlands  after me.  I figured being from the Netherlands, she was good at TT’ing, and I just hoped I wouldn’t lose time to her. With 1 minute intervals between riders, I got out of the start house quickly and settled into the first climb. By the second climb, I had passed 2 other riders, and by the top of the second climb, before the 5 mile mark, I had passed my minute person, Jennie Sammons of Australia, who ironically, lived in New Jersey for a few years, and has done the Silvermine Time Trial, as well as other local TT’s.

Once I had no more riders in front of me, as usual, I started to lose focus. I always go faster when there is a “rabbit” in front of me.  I had to keep whipping myself back to push harder.  I flew down the long descents, and was glad I had an 11 cog on my disc wheel, hitting speed of over 42 mph. The last little climb to the left turn to the finish was painful, and I poured it on once I got on the finish straight.  I finished in 43:03, winning the Gold Medal and the World Championship for my age group, 1:32 ahead of Jennie Sammons who took second, with last year’s World Champion, Marti Valks, in third.

The podium ceremony at the World Championships was very impressive; they hoist the flags of the three medalists, and play the national anthem. I was very proud to see the American flag, and hear the “Star Spangled Banner” played. 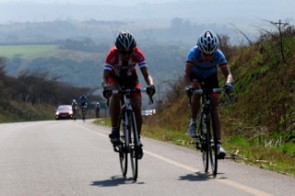 Two days later, Aug. 25, the weather heated up for the Masters Championship road race, and it was almost 90 degrees with a fierce, hot scirocco-like wind for our 9:00am start.  The 44-49, 50-54 55-59 and 60+ women’s fields were run together and scored separately. The race started at the same place as the Time trial, following the Time Trial course exactly, and then heading back into Pietermaritzburg over Table Mountain, finishing in Alexandra Park.

The group rolled out at a moderate pace, until we got to the first climb at about the 3 mile mark.  By the top of that climb, we had lost about a third of the group.  On the backside of the opening loop the wind was fierce, and I was fighting to keep my bike from being blown into the sugar cane. Once we got to the base of Table Mountain, the field shattered and I was in the front group of 4 riders; me an  Italian racer, the winner of the 50-54 Time Trial from Norway, Sissel Vien, and a South African who had taken 2nd place in the 50-54 TT.  I had decided I would try to stay with the Norwegian if the field broke up, because she had one of the fastest TT times, and she was bigger than me so I figured she would be good to have on the descents.

I told the Norwegian I would work with her, and we set out to catch a South African racer ahead of us.  I was pulling ahead of Sissel on the steeper parts of the climb, but we worked together & I was glad she was with me on the descent into town.  Once we got into Pietermaritzburg, it was a little chaotic, because the marshals were trying to steer traffic off the course and it was hard to tell where to turn. At one intersection, we literally came to a halt, trying to find out where to go, until I saw a sign for the race course on the road ahead of us.  I knew I was well ahead of anyone else in my age group, but when we entered the finishing straight, I wanted to sprint to the finish, and I sprinted ahead of the Norwegian, who was not in my age group, winning the road race for my age group by 7 minutes over Marti Valks of the Netherlands. 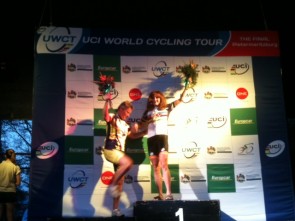 The Road Race podium ceremonies were held that night in Alexandra Park. In addition to my Gold Medal in the Women’s 55-59 category, several other US riders made the podium, including Molly Van Houweling, who took Gold in the Women 35-39 group, Katheryn Mattis, the 2005 US Elite National Road Race Champion who was 2nd in the 35-39 group, and James Mattis, taking the bronze in the Men’s 35-39 group.

Racing against international riders was a great experience, and the whole event was very well organized, and professionally presented. The UCI staff were very accessible, including the event director, Erwin Vervecken, the former UCI Cyclo-Cross World Champion.  I thought it was cool to be able to casually have a conversation with a former World Champion!

August 30, 2012
CRCA Successes at GMSR 2012How to Start a New CRCA Sub-Team: Tips from Matthew Vandivort of Team Sixcycle-RK&O
Sponsors