The New York City Department of Transportation released plans for a park-wide speed limit reduction and other pedestrian-focused safety measures in a recent press release. The most noteworthy of these changes are as follows:

– Speed Limit reduction to 20mph inside Central Park for all modes of transportation.

– Installation of barricades at two crosswalks on West Drive (Sheep Meadow crossing @ W68th St and Heckscher Ballfields crossing @ W63rd Street) as pictured below during car free hours. They will be removed when cars are allowed in the park.

In addition to the changes listed above, DOT will be repainting lane separation lines (weather permitting) and adding lane designation markings to try to make the designations more visible and easier to understand. We were informed that bollards (the vertical posts depicted in the left side of the rendering below) will not be installed. 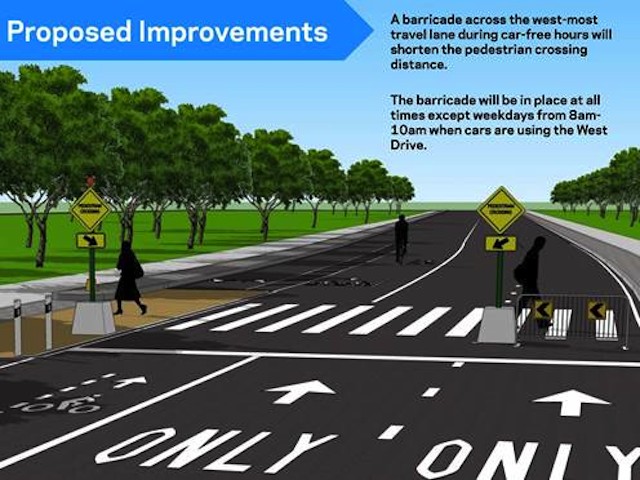 We, along with representatives from NYCC and TA, met with members of Central Park Conservancy, Central Park Precinct and Parks Enforcement Patrol at a CPC Recreation Roundtable meeting earlier this week in an attempt to understand the reasoning behind these proposals, and to learn more information about the timeline for implementation and enforcement. Unfortunately, DOT did not attend the meeting as they were scheduled to, so we still have many open questions yet to be addressed.

That said, here is a summary of what we know and don’t know:

– We anticipate that the 20mph Speed Limit will be in effect as early as this upcoming weekend (once the signs in the park have been changed), but have no concrete date from the agencies.

– Central Park Precinct has not offered any comment or indication as to whether radar gun enforcement or any increased enforcement activity will follow, but they note that all park users are at all times subject to the laws and regulations applicable to Central Park. Summonses will be issued at the officer’s discretion, and they are currently still focused on the following:

– No implementation date has been given yet for the installation of barricades or caution signs (including advisory 10mph speed signs in advance of crosswalks). However, these safety features are presented as a pilot program (the length of which is unknown) and we encourage members to give feedback during its implementation. We will provide the appropriate contact information once we know it.

– We were told that it is not DOT’s intention to negatively impact permitted events in Central Park with these traffic features (i.e., the barricades and caution signs would be moved during our races), but we have not received any confirmation or promise from DOT on this issue.

– CPC, CPP and PEP plan on continuing to educate park users through flyer distribution and public engagement personnel on foot.

We are continuing to follow up with DOT as well as CPC, CPP and other stakeholders and will inform CRCA members as soon as we have any new information. Please continue to check back for updates. 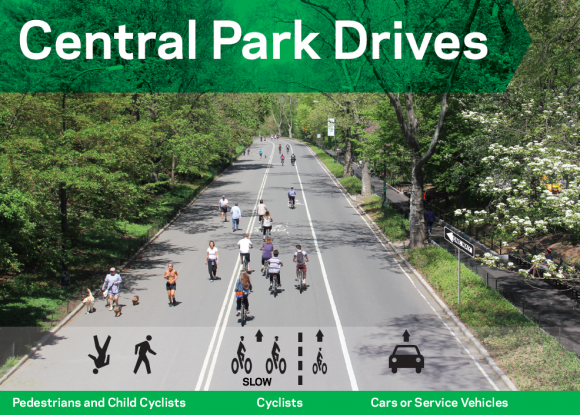 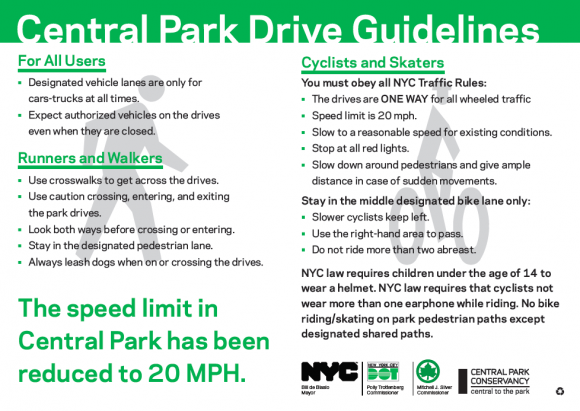