CRCA Takes to the Track

The Omnium is one of the bigger meets at Kissena. The season culminates with the State Championships on August 29-30 at CRCA will crown it’s Club Track Champions.
Complete Results

Colin was just back from a short vacation to St. Thomas and some well deserved time off the bike. This week he starts his third year of medical school. Increased school hours kept him from entering Fitchburg but he hopes to do well on the track and to maintain his lead in the Jim Boyd competition.

In the Cat 4/5, Matt Hughes,CRCA New York Athletic Club, took fourth and George Suter,CRCA /Die Hard-Think Racing, fifth. George was in position to podium until he missed the start of the scratch race. 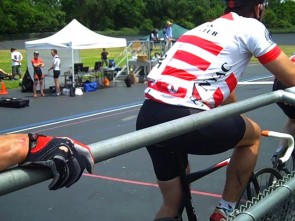 After leading the C field through a sub 14 minute lap on Saturday, Matt
looked good in his first race ever on the track. “Getting smarter every race, learning what the jump is, still don’t know what the jump is,” said Matt. But with all out efforts from the gun, he felt that track racing is more like rowing.

Gavi Epstein who started riding at 14 with CRCA took second in the 4/5. Gavi now riding with Champion System thinks some track work can get him to the next level on the road. He did his first track race last week.

Also taking to the track were Danile Lim with a good sixth place finish in the 1/2, Scot Willingham 8th in the 4/5 and Patrick Littlefield, tenth in the 4/5.
Caroline Gaynor readied for the CRCA Women’s Championship in the women’s race. 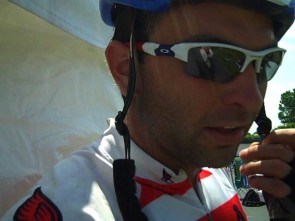 The Omnium was made up of a Flying 200, points race, pursuit, scratch race and a 400 meter TT effort.

With long breaks between many short efforts, the day at the track is very different than road racing. Riders come with their tents, several wheel sets, sets of chain rings and cogs, trainers or rollers, food, drink and very importantly beach chairs. 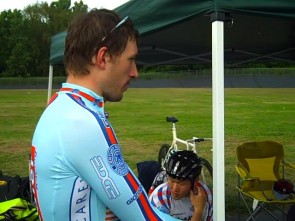 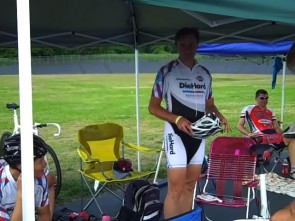 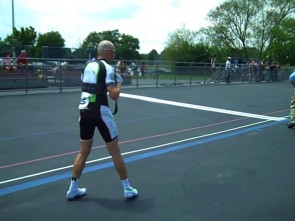