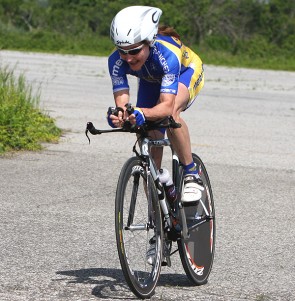 On June 28, Ann Marie Miller won the women’s 50-55 road race in her first race in this year’s Master’s Nationals. A few days later she added the 50-55 Criterium Championship While last year Ann Marie won the road race, TT and criterium jersey’s, this year she had to settle for third in the TT.

“This year’s race was tougher than last year, with a tough 3 person break. Some Cat 1’s from the west coast came in and they were good,” said Ann Marie.