CRCA Season Ender for Turkeys and a King on Saturday 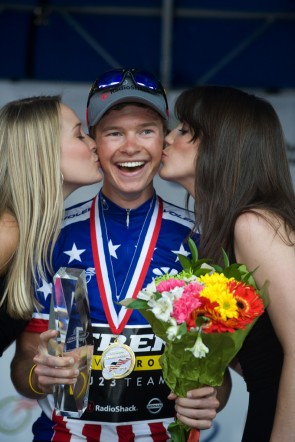 The traditional CRCA Turkey Race returns this Saturday, November 20. Joining the race will be current US Pro National Road Race Champion, Ben King.
After fading away for a few years, the Turkey Race is back. As has been tradition since before most members were born, the top finishers in each field of this pre-Thanksgiving classic receive a big bird. There was some discussion with the Dept. of Parks about having the winners chase live turkeys, but incoming VP of Club Racing, Zak Abdullah, scotched that idea.

We are privileged to have current US Pro National Champion Benjamin King join us in this race. Ben’s participation has been arranged by the USA Cycling Development Foundation and USA Cycling.
King, who rides for the Trek/Livestrong team is at 21 years old, the youngest US Pro Champion ever. According to Steve McCauley who heads the USA Cycling Development Foundation, Ben is rumored to have planned his entire season’s peak for the Turkey Race.

Ben is visiting NYC to help bring awareness to the USA Cycling Development Foundation. The USA CDF supported Ben’s rise through the U23 ranks while he raced and trained in Europe with USA Cycling’s National Athlete Development Program.

Ben will be happy to stick around and speak to juniors and everyone else about his experience with the Development Program after the race.

Come end the season in fun fashion and get to race with and meet Ben.

The USA Cycling Development Foundation was very helpful in getting Evie’s career started. Shortly after winning Fitchburg she went to Colorado as a candidate to race with the USA National Development Team. In August of 2009, she went as part of the USA Team to race in Europe and train at the USA Cycling facility in Lucca,Italy. Excellent placings in races in France and Italy earned Evie a spot on the US World Championship team and a contract with HTC/Columbia.

The women’s program based in Lucca and the men’s program in Belgium are major initiatives of the USA Cycling Development Foundation.