In light of the upcoming CRCA Dave Jordan Central Park Classic, we want to remember Dave Jordan and his tremendous legacy. 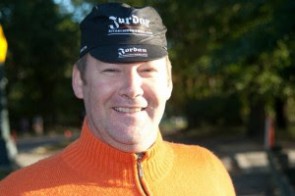 Dave Jordan was an accomplished rider who shared his knowledge of the sport, passion for the camaraderie, competition, and thrill of the race with hundreds of athletes. Dave was a competitive, driven cyclist who stood on more than 200 podiums, and coached many others to similar success over his 20 year career. He was dedicated to bringing out the best in his team and known for believing in the potential for everyone to find their next level. Dave Jordan Racing team continues on developing riders to their highest potential in honor of Dave, a true ambassador of cycling. He was dedicated to life, laughter, his family and a day on the bike. Dave passed away from complications of a brain tumor in July 2012.

Dave started racing bicycles when he 11 years old. He began competing on bicycle motocross (BMX) bikes back in 1979 and entered road racing and multisport events in 1987. In that year he joined Century Road Club Cycling Association (CRCA) where he steadily improved his racing skills, progressing from a Category 4 racer to a Category 1 road racer and Category 2 track racer within a few years. He eventually won eight New York State Championships. He was a diverse and an exceptional all-around rider winning in events such as the Team Time Trial (TTT), Individual Time Trial, and Road Race, as well as track events like Points, Pursuit and Team Sprint competitions.

Dave Jordan – The Early Years
In 2000 and 2001, at the Masters National Championships, David was a three-time medalist in Criterium, Points, and Pursuit. During his competitive racing days, David raced on more than a dozen race teams in the US and Europe. He represented the US National Cycling Team in Panama (1994) and twice in the Dominican Republic (1991, 1995), providing support for teammates that won stages and the General Classification. He also raced for elite amateur cycling clubs in Brussels, Belgium (1989) and Chalons-sur-Marne, France (1991).

Dave was an expert in bike fitting, performance testing, and coaching programs. As a cycling coach, he worked with top road, track, mountain, and triathlon professionals. Dave coached riders to Masters World and National Championships, to Collegiate National Championships (Western Washington University), and he helped local and regional racers to many victories and category upgrades. He coached both men’s and women’s teams and developed junior riders into accomplished racers. He coached Jill Kinter in her pursuit for National, World Championships and Olympic bronze medals in 2005 and 2006. Dave also coached and further developed the New York University (NYU) Cycling Program in seasons 2006 and 2007. Dave was also President of CRCA, the largest cycling club in the US and was bike consultant, along with Nate Loyal, on the feature film “Premium Rush”.

Among all of his accomplishments in cycling, Dave is remembered foremost as an incredible family man, dedicated father to his children Isabel and Magnus, and great friend. Dave’s coaching knowledge, style, leadership and passion for the sport lives on through the efforts of his team, Dave Jordan Racing.