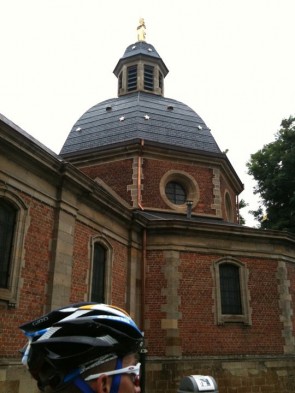 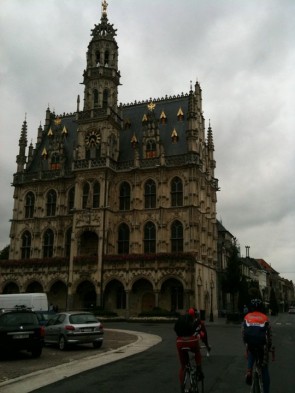 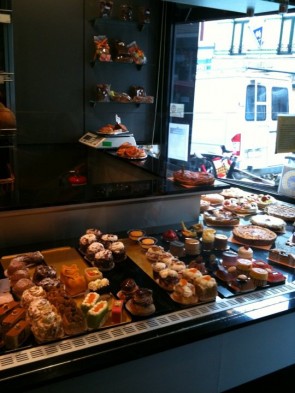 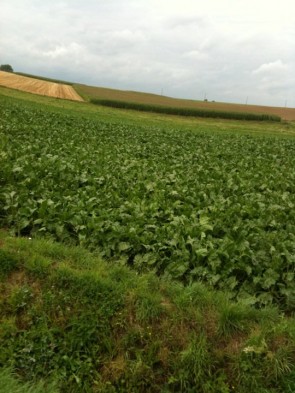 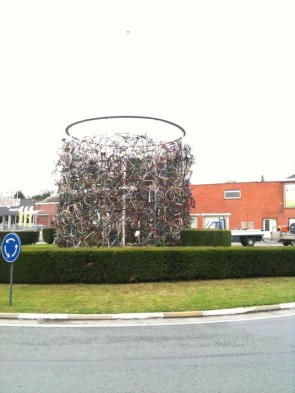 CRCA Jr. Development rider Wei Chen left for two weeks of racing in Belgium on Sunday. This is pretty amazing considering that this is Wei’s first full year of racing. Wei showed strength early in the season at Bear Mtn where he was in a two man break for most of the Cat 4 race. Unfortunately he was caught with less than a mile to go. With some good results Wei moved up to a Cat 3 and got invited by the Colavita Baci team to go to the Le Tour de l’Abitibi Stage Race in Canada. At l’Abitibi he was asked to go on the Belgium trip by Team San Jose Hotel from Austin,Texas.

Finally got back last night………unfortunately. And guess what they LOST my bag, well my bike box THIS time. When i flew to Belgium they lost my luggage full of clothing, now flying back they lost my bike box. But its alright because I’m not really prepping for any race soon. But besides that I had tons of fun in Belgium, it was a great experience as a person and as a racer.

Racing in Belgium is was AMAZING, it’s also just on another level compared to the US races that i’ve done. Kids there just never ever say quit, if there is a break up the road, the peloton chases with an incredible effort. If they happen not to be able to chase the break down, they will try to shatter the peloton once again and again and again and again. I was told there was a race this year where only two, TWO people finished out of 240 because they were in a break and the rest of the racers couldnt chase them down. The race organizers had to pull them out because they have to keep the back of the race and the front of the race within a five minute gap and they exceeded it.

One way of describing Kermesses in Belgium is by saying its a long crit, on circuits that are just as narrow as the bike path you ride on. An example is the west side highway bike path, i couldnt remember a circuit that had wider roads then that. Despite the narrow roads, the racers in Belgium can handle there bike extremely well due to the fact that most of them race cyclocross in the winter, that’ll sharpen up your skills. Don’t get me wrong there were bumping and shoving going on but thats just racing, if you can’t deal with that then i highly suggest you get used to it.

While in Belgium i was able to take in the culture and style of living there as well, its a lot more laid back. It’s peaceful, even in the big towns, you’ll usually see locals outside of a cafe sipping on there morning cup of coffee, just enjoying life. And they hardly ever work, my goodness. Their work schedule is Sunday and Monday off and 9am-12am, then they take a two hour break and get back to work until 5/6. That sounds like quite the schedule if you’d asked me.

In the US, well at least in nyc its always go,go,go, i have to do this, i have to do that. It’s quite the opposite, i dont know about you but i prefer the euro style of living. That’s why come next march/april and summer, ill be spending my time in Belgium once again!. I cannot wait. I miss Belgium already.

Anyway ill end this blog by saying, I LOVE CRCA, the whole club, for all their support because without the board of directors and JR. DEVELOPMENT team. I don’t know what i would have done this year, i got into this sport after i saw the first stage of the Tour de France last year, seeing how fast these guys were riding, i wanted to do the same. So i started riding a road bike and was introduced to CRCA by a bike shop in the city, NYCVELO. The staff there called Ken Harris one day and told him that i should be on the team, i was ecstatic when i was invited to the team meeting in the winter. I said to myself, where will i be in 6 months? Is this sport really for me? Anyways im just ranting now, thanks to everyone who’s been reading this and thank you for your time.

5 Euros. 5 euros is what i won today, this is the highlight of my trip so far. I was so happy to see that white envelope. Todays race was on a 5 km,17 lap circuit. The registration was at a bar/cafe as usual, as we register for our races, the locals sip on there beer. Probably gossiping about “the americans”(us). Racing today was BRUTAL, there was once again a cobble stoned section that robbed you of massive watts. Right off the bat, there was an attack, that attack ended up creating a 11 man breakaway that stayed away all race. Soon after that attack the peloton consistently attacked one another (i remember this being incredibly annoying at one point) not to mention painful as hell. Eventually the peloton just shattered, completely. Only 30 people finished the race today, the narrow roads that were open to crosswinds cracked us all. Today was a true strong mans race. If you didn’t have the acceleration, the mental toughness and power to hang in there, you were simply not going to finish. Im fatigued just laying here on the couch and typing this, this update had officially cause me to bonk.

1st day of weekend racing here in Belgium wasn’t too spectacular after some bad luck. A teammate and i were in the front after the second lap of nine because of all the constant attacks, our plan was to follow each one and possibly get into a break without burning too many “matches”. Eventually there was a break that my teammate and i were in, we had a good split from the peloton but was caught several moments later. After the 4th lap i saw my teammate attack on the right, my initial reaction was to go but when i saw the peloton wasn’t committed to following, as i saw the gap continue to grow i saw it as an opportunity for my teammate to be in a break. Several moments later some bad luck swung my way and a piece of newspaper gets stuck under my fork. As i finick with it i get swarmed by the peloton and next thing i know, im on the back with a gap growing but as i accelerate it almost feels as if im hitting my brakes while sprinting. Then as i look up theres a gap and im unable to close it. Eventually i pulled out knowing theres no way i would catch back on. But the attack by my teammate ended up being the critical move of the race, he wounded up 11 out of a 12 man break with a 2 minute gap on the field. So all in all it was a good day, tomorrows another day.

So, today was a rest day nothing to crazy as far as training goes, spun around for awhile in preparation for the weekend races. Today was quite nice actually, the weather was perfect and pretty warm in Belgium. The house had the chance to actually see the Eneco tour that is taking place right now, we saw a couple guys in the break with a 7 minute gap, break included Andre Griepel. The peloton passed right by our house, this trip has been a great experience already and i look forward to the coming days. Updates on the races to come. 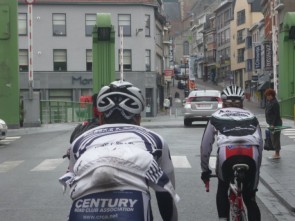 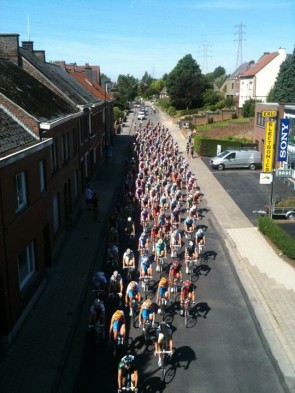 Finally got a taste of european racing, it was all that i’ve expected, fast and harder then anything i’ve done. Todays race took place in Mere, the kermesses was a figure 8 like course(11 laps), it included one section of cobbles with tons of technical turns, it was pretty intense if you’d asked me. The race pace was extremely high the whole race and there were attacks going constantly. Eventually one stuck and they ended up 20-25 seconds ahead of the peloton. All i can remember about the race was the immense amount of pain i was going through after about the 9th lap, being towards the back of the peloton wasn’t helpful at all, the constant slowing down and sprinting out of every corner took its toll on me. I ended up finishing with the main peloton with about 60-70 guys, the race started with about 130 people and only about 70 guys finished, everyone else dropped out. Im actually pretty proud of myself given that i was the only guy that finished on the team, my teammates had their mishaps, flats and fatigue issues. Next race is on saturday, tomorrow everyone is going to the bike museum and tour around town. That’s all for now, will keep you updated.

Finally settled down and relaxed after yesterday, got to know the guys and girls here. The house is full of cyclist from all over the world, people from Israel, Canada, US, England, and etc. Today was a nice easy 60km ride to a bike shop by the infamous Muur. We went all the way up to the top where there a little tower. It was pretty surreal riding on roads that many pros and legends have ridden on.

The scenery is amazing, despite the constant drizzle here and there but its nothing unbearable, after all this is Belgium. My first race is tomorrow, then saturday and sunday. Monday we are going site seeing in a bike museum. I’ve attached some of the pictures i’ve taken so far, ill take some more.

The bike actually made it here to Belgium, don’t know what happened to the luggage though. Suppose to send it to me asap.

Unbelievable, checked my bike box, one luggage, and one carry on in yesterday, prior to the flight. I took my carry on the plane, full of bike stuff such as shoes, helmet and kits. All the rest of my clothing is in the luggage. My flight was to go from JFK to Heathrow, London and then the following day it would be from London to Brussels(today). I was given the impression that when they checked my bags in that it would automatically transfer onto the next plane flight but that wasn’t the case.

Now they can’t find my bags, saying “it possibly may not have gotten on the plane because had it come your luggages should be right there(corner of the baggage pick up area)”, i was pissed beyond belief and still am. Now my trip is all f***ed up because of this. So i gave them my address to the place im staying in Belgium and they’re trying to locate it and ship it to me “asap”. What a nightmare it has been so far. Ill keep you updated as to what happens.