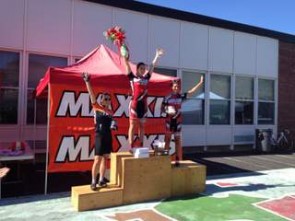 Hatch and Hadgis on the Zeppelin Crit Podium

At the Zeppelin Criterium on Saturday June 16 Jeff Cline of Axis took 2nd in the 35+ field, Doug O’Neill won the 55+ field followed by Richard Kazmir, and Helen Hatch and Chris Hadgis (Innervation Fitness/ Stan’s No Tubes Women’s Team) took 1st and 2nd in the women’s 4 field. Full results can be found here.

At the Skyscraper Harlem Criterium p/b Rockstar Games CRCA members took the top podium spots in the cat 4 and cat 2-3 fields, along with other top spots as well. Michael Anderson of Siggi’s NYVelocity won the 4 field by a number of bike lengths followed by Michael Nelson of Six Cycle/RK&O 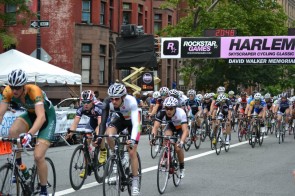 and then Stefan Singer of Siggi’s NYVelocity in 3rd. In the cat 2-3 field Chase Goldstein of Arc Racing took 1st, followed by Zach Koop of Blue Ribbon Translations and then Everhard Paredes of Champion System p/b Stan’s NoTube. Also, Rafael Meran of Foundation got 4th in the Pro-1-2 race, Mihael Ginhina of Targettraining got 5th in the 35+, and Anthony Taylor of Dave Jordan cycling took 1st in the 45+ followed by Chris Chong Tenn of Diehard. Full results can be found here. 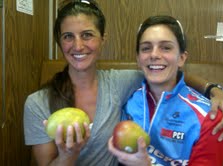 Hatch and Hadgis with Mango Prizes after Watermelon Crit

Belated note: also, a couple weeks back on Sat. June 2 at the Watermelon Criterium Michael Nelson of Sixcycle-RK&O got second in the 4/5 field, David Taylor of Eumaeus cycling got 2nd in the Men’s 45+ field, Richard Kazmir (listed as CRCA) won the 55+ field, Beth Renner of Innervation Fitness/Stan’s NoTubes Women’s Racing Team got third in the women’s 1-2-3 field, and in the women’s 4 field a group of four CRCA racers established a breakaway that stuck and lapped the rest of the field, taking all the top spots: Victoria Brumfield of Radical Media with first, followed by Helen Hatch and then Chris Hadgis (both of Innervation Fitness/ Stan’s No Tubes Women’s Team), then Lisa Kennish of Asphalt Green. Nice job all! Full results for the Watermelon Crit. can be found here, and video of the 4 rider women’s  break can be found here.