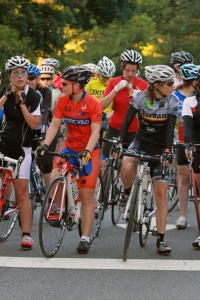 The 2012 Edition of the Women’s Race clinic took place on Saturday, Jun 16 organized this year  by the women of Radical Media along with members of the Rockstar Games and other teams. This clinic has a great history. Pro and soon-to-be Olympic Athlete Evelyn Stevens got started bike racing at the CRCA clinic, as she explained to NPR’s Murray Carpenter:

To listen to Carpenter’s full story on Evie, go here.

The following is a report drafted by CRCA coach Tara Parsons and Victoria Brumfeld of Radical Media.  Thanks to Tara, Victoria and the other CRCA women racers for putting on this great event!

We had a beautiful morning for racing; clear skies, cool temps, and around 40 women registered for their first, or nearly first, bike race!

CRCA coach Tara Parsons gave the pre-race talk coving the important must- knows of Central Park racing including recreation lane rules and field neutralizations. She then went over bike race safety including wheel overlap, sudden lateral moves or braking, holding your line, scanning the road and field in front of you, being alert and vigilant and RELAXING. The riders were encouraged to have fun and ride an active race. It was explained that an active a racer improves her fitness/ skills/ and racing ability more quickly, especially within a group with similar ability. Racers were encouraged to create races within the race if they weren’t with the front group, and to not give up.

The race went off without incident with racers corralled by the experienced Radical and Rockstar riders throughout the neutral start. Once racing began it began in earnest. Racers really took to heart the idea of riding an active race and trying things out. The pace was high from the beginning with the field strung out and a gap forming right away. The front group separated with about 15-20 racers, and all of them put in a strong effort. Jacqui Parker, the eventual winner, tried to get away a few times in the first two laps, but the other strong riders in the field pulled her back. There were good efforts by many, including Anna Mumford, Masha Schneider, Maria Rosenfeld, Lauren Dagostino, Gabrielle Czernik, Anush Ricci, Caitlin Lowder, and Tonya Miller. The already speedy pace picked up for the prime with Gabby taking it. After the

prime, Jacqui, who has natural race instinct, attacked and this is where she got away. Gabby Czernik and Lauren Dagostino went with her. The field fought to reel them in, but they weren’t used to pacelining to make that happen. Fanny Bourdais attempted to bridge to the front group on Harlem Hill, but couldn’t quite do it. On the final lap Jacqui attacked her breakaway companions and soloed in for the win. Lauren was second and Gabby third. Maria Rosenfeld sprinted the field and took fourth, followed by Anna Mumford, Tonya Miller, and Anush Ricci. 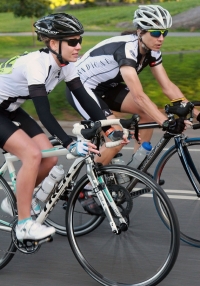 Other racers behind the front group did take the advice to get their own race experience and not give up. There were many racers working together and then attacking and sprinting for the line including a strong finish by Daniella Shachter from her group. Congratulations to all.

The race was followed by a question and answer period, advice from the vetran racers, and group photos! Women were encouraged to join CRCA for some of the best developmental coaching and women’s racing in the nation.