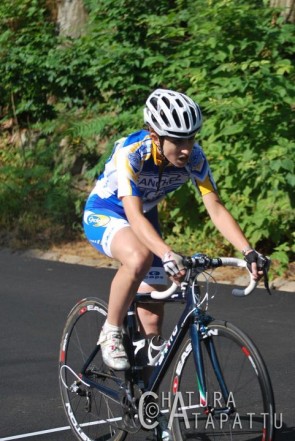 Suzanne Lucash a cat. 2 rider for the CycleLifeUSA GF Capital CRCA Subteam recently did the Pro-1-2-3 Women’s Field at the 2012 Catskills Stage Race supported by the CRCA Rider Stipend Program and submitted this report on her experience, taking 6th in the GC after 15th in the TT, 8th in stage 2 and 7th in stage 3.

The race started out with an 11-mile TT.  I am not a great time-trialist by any means, but I was happy to come up with 15th.  That result definitely helped me on the GC, but the time trial is long enough that it takes a lot out of you before the next day.

Stage 2, with over 5,000 feet of climbing, has a QOM around mile 22 and then descent and flat roads to the bottom of Devil’s Kitchen, which kicks up to over 20% grade.  Not much happened on the stage, as expected, until we got to the bottom of Devil’s Kitchen. I came into the climb second or third wheel, just where I wanted to be.  Everyone went hard from the bottom of the climb, and I watched a handful of women move up ahead of me; but on a 20-minute climb, I knew I had to pace myself or I would blow up and be walking the steepest sections.  I spent the climb in my 28-tooth chain ring on the back (I ride a compact crank).  The heat got to me so badly that I was getting chills.  I was at the point in the race where you are in so much pain that you desperately want to get off the bike, but I promised myself I would not unclip, because I was not sure whether I could get back on.  One woman passed me about ¾ of the way up the climb.  As much as I wanted to pick the pace up then, I didn’t have the legs to follow. As soon as I crossed the line for 8th place I U-turned back, set my bike against a store, and ran into a café I remembered from last year to beg for water.  The women working there were so kind and insisted on filling my water bottles for free.

Stage 3 is possibly even harder than Stage 2, with slightly more climbing on even more tired legs. By the time we got to the QOM, it was a small group of maybe five of us. No one seemed to want to work to keep the break, even as more and more riders caught back on the descent.  We went through the second feed zone, where another rider was extraordinarily kind and grabbed the feed that I had missed.  She rode up to me to hand me my bottle; that is one of the most generous things someone has ever done for me in a race.

Finally, around mile 50, we got to the bottom of Airport Road, the second and last major climb of the day.  The field broke up quickly as we made our way up the steep steps and false flats of the 2 miles or so towards the last QOM.  I pushed hard to keep up with the front group of four, but ended up, about midway up the climb, alone, with the front four, including the GC leader, in sight.  I settled into my solo break and started motoring along, down in the drops and counting down the miles to keep myself going as hard as I could.  Finally, on the right turn onto County Road 23, just a few miles from the finish, I caught one of the women from the four ahead at the same time as the woman behind me caught up. We picked up another rider who had been dropped from what was now a group of two ahead (plus the first woman in her solo break), so collectively we were 4th-7th place on the road.  We rounded the final right hand turn and took a long sprint from the very bottom of the final 500 meters, but I slid back and came in the last of our group, in 7th, putting me in 6th for the GC.

Catskills was probably the toughest race I have done all season, and it taught me a lot about what to work on for next year.  Thanks to CRCA for the stipend that made this race possible.  Without it, I would not be able to look forward to (schedule allowing) racing GMSR this year as well!