Strategies for Making the Most of Each Park Race 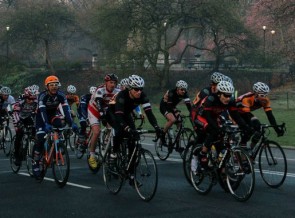 For most of us, winning a CRCA club race is/would be a moment of glory and great satisfaction.  We racers and our teams have all figured out strategies that give us the best chance of winning.  And we usually repeat these strategies again and again in order to increase our chances of winning.

But one of the missions of the club is to prepare our racers for important USCF races around the region and nationally.  To that end, repeating the same strategy race after race in our club training races – while increasing the chances of success in the park – may not be prepare us in the best possible way to enjoy success on other courses and against stronger riders.  As one of our top club racers, David Taylor, says, “don’t just sit in pack and ride around in circles…try to use park races to experiment tactically and push your physical limits. If you get through a season without experiencing some type of spacial disorientation or nausea then you’re not trying hard enough.”

Or in the words of John Eustice: “Many new (and experienced!) riders are much too cautious and calculating when they race. They seem to be only looking for results rather than performance. You need to learn how to race at the front, to attack and counter-attack. Riders need to master the idea of participating in the the flurry of unending attacks that eventually give way to a proper breakaway. What you see instead is: a rider or two attacks. The field chases. They catch the break and everyone sits up…  Learn to counter attack, get caught and attack straight away again! You’ll only become stronger and acquire the needed habit  of racing at the front.”

With these words of wisdom in mind we would like to humbly suggest some alternative strategies for riders and teams to try out in our park races, to broaden our experience and perspectives, and make us more complete racers.  Some of these might be more appropriate for our B & C field riders, while others might apply more to the A or Women’s field.  But the point of them all is to help develop riders who may only specialize in one area so they are capable of competing – and winning – in different ways.

1) Sharing the Sprinting Duties. Some of our teams have great sprinters and those teams often work single-mindedly for that sprinter – neutralizing breaks, protecting and advancing the sprinter, doing a lead out train, etc.  Try giving other guys on the team a chance to be the featured sprinter.  You never know, you might have guys on the squad who have untapped sprinting talent.  And even if they don’t win, it’s still great for all racers to practice finishing.  When that day comes and you’re in a break in an important regional race, you’ll have a better chance to podium or win if you have some experience in a field sprint.

2) Put the Sprinter in the Break. Sprinters like to hang out all race mid-pack and then do an enormous effort at the finish and hopefully win.  That’s great, but try putting your sprinter in the early or mid-race break.  It will first of all give him or her some experience in riding in a break, and also give some perspective on how hard it is to be part of a longer break.  At the very least this will give him/her some appreciation for all those failed break attempts by us non-sprinters.

3) ATTACK: As David Taylor points out, “In any A race there are maybe 4 or 5 riders that can realistically win a field sprint, those riders may have 3-5 team mates leaving about 80 riders who should be attacking otherwise they’re not really racing. You don’t have to be the strongest rider to make it into a break. Any rider can make it by reading the race and following the right move or by anticipating the race breaking apart and attacking first then waiting for the stronger riders to come across. It’s important to commit to the break when the opportunity arises – too many moves shut down for lack of commitment – you need to ride the hardest to initially establish a viable gap and wait to recover a little once you have a 45 second lead or just recover in the coffee shop after the race. Up and coming riders need to establish a reputation for being reliable workers in a breakaway. The better your reputation the better the company you’ll keep during the races.”

4) Timing Your Attacks. Some riders prefer to attack towards the end of the race, or midway, or at the gun.  And that one strategy is all they do. Mix it up!  Try a crazy kamikaze attack in a place no one expects.

5) Attack in Different Locations. As with #3, sometimes we want to attack at the same location: Engineer’s Gate, or HS Alley, or Harlem Hill.  Try attacking at different locations and see what happens.

6) Riding in the Middle of the Pack (instead of on the side or behind).  Some racers, especially newer racers, will gravitate towards being in the safest position, usually on the outside or at the back.  A great exercise is to do a race where you consciously spend most of the race in the middle of the pack, and practice advancing position by moving up through the middle instead of on the outside.  In the A field, just holding a top 15 position, especially on that last lap, is a challenge for some.  But being comfortable in the middle of the field is a skill worth having.  And being able to move up safely (and let me repeat, safely and not aggressively or recklessly) is highly valuable and energy-saving.

All of us who are part of the CRCA community should be proud of our history of putting on – and competing in – competitive races held in the heart of Manhattan. We suggest you make the most of them by using them to become more complete racers.

This story was contributed by Marc Mauceri, long-time member of CRCA and part of the CRCA/Setanta Sub-Team. Thanks to him, David Taylor and John Eustice for their contributions. Please send other story ideas to communications[at]crca.net.