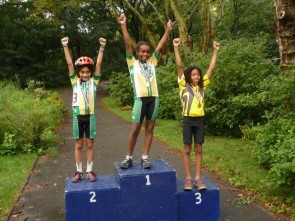 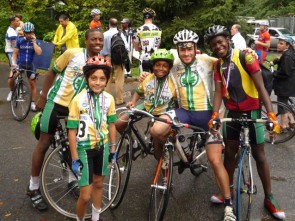 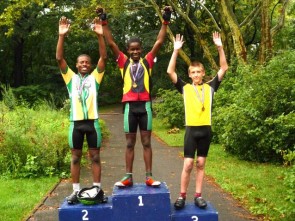 A major goal of the club is to help develop junior racing. It’s not easy, but Deirdre Murphy has had some success with the Star Track program. It was great to see a number of kids from the program particpate in the Mengoni and Harlem races. Following a brief description of the program are the stories of several of the Star Track team members.

Star Track was founded six years ago, by CRCA member Deirdre Murphy. After competing in the 2000 Olympics Deirdre has given back to the sport by developing the Star Track program and running CRCA coaching sessions. Star Track’s goal is to improve the health and life skills of youth in New York City through the sport of cycling. As a team sport, cycling fosters leadership skills, teamwork, self confidence, responsibility and a focus on health. Participants come from 4 boroughs to participate in this program, which is geared to 9-13 year olds. This winter, Star Track will partner with Asphalt Green to bring the children’s cycling training indoors, making Star Track a year-round program.

Star Track has become so popular, that it’s in need of more track bikes. Contribute $500 to Star Track’s Adopt-a-Bike program, and your name will be prominently displayed on one of the Fuji track bicycles. To Adopt-a-Bike, please send a check for $500 made out to “City Parks Foundation” to Deirdre Murphy, 12 East 87th Street, 3B, NY, NY 10128.

In addition, Executive Director, Deirdre Murphy, would welcome the involvement of other Club members to be Coach-for-a-Day. Please contact Deirdre at rainbow97[at]att.net if you are interested.

By Bobbie Cordero
My experience with Star Track is the best experience I’ve ever had.

My brother and I joined two years ago. We love riding and playing. We always used regular dirt bikes. My name is Bobbi Cordero and I have asthma.

Before I started riding for Star Track I was always in and out of the emergency room getting treatments, for my condition. My doctor said I needed to do something to build my lungs. So my Mom and Dad introduced me to cycling. My Dad rides, but not professionally and my use to ride dirt bikes. I was scared at first but wanted to try.

First we were taught the functions of the bike by taking test by coach Delroy. This was basically every session. Our coach would go over the work with us until we got it right. Afterwards we would learn how to ride.

My first expeirence on the track bike was weird. There were no brakes! and when you pedaled the bike forced you to keep moving. We rode around a huge track, like the ones you race on but it had a hill to it. I learned to ride on it , I learned how to do a pace line and how to work with others. I met new friends. I learned team work.I also learned when you fall you get back up. I also learned how to ride by myself. Time trials are the hardest for me because your racing against yourself.

I learned how to compete and race. I have won many trophies and enjoy my parents and friends cheering me on. I like to cheer my friends on too.

I was just introduced to Road racing in Central Park. It was fun. I used a different bike. I used a Road bike, it had brakes and gears. I came in first place. It was hard because we road on hills, wet grounds etc.

It was different from track raving where you just ride around in circles at top speed. Buth experiences were great.

I still enjoy coming to Queens from the Bronx. I take two trains and a bus to get to the Velodrome to ride. I dont get asthma attacks so often , this year I had none, my doctor asked me what have I been doing to stop it. I said I ride track bikes, he said keep it up, your lungs are great.

I love riding, its fun and I get to play with my friends. Star track is the best.

By Laszlo Sander
Since I was a kid I was always interested in bike racing and I kept begging my dad to enter me in a race. So he looked and entered me in the mengoni kids race in Central Park. Before the race I was very nervous because I had never raced before. During the race I fell behind, but on the hill, (which is the last part) I beat the guy who was ahead of me to win my age group. After my race I loved racing. I wanted to race more so my dad found Star Track and I joined. Star track taught me how to race with track bikes. I learned a whole whole lot and now I am a much better racer. The next year I did the mengoni race again only to lose to my own teammate from Star Track. I got second place but I was still a much better racer then before.

By Robert Cordero Jr.
My experince with star track is fun. I learned a lot from when I used to ride mountain bikes and dirt bikes. It’s much different riding track bikes because the pedaling keeps on going.

My name is Roberto Cordero Jr. When i first started track racing, it was hard, but when when i got used to it-it was tha best thing i ever did in my life!

When I met the people at Star Track, I felt welcome. Everyone there is nice so I dont reallly need to worry about bad things happening. I love racing at Kissena, I won a couple of races in first place and I’m planing on trying to win a couple more. I’ve been into track racing for 2 years now, and now i experiernced something else, ROAD RACING!

When i did my first road race in central park, i didnt know what to do with my gears(and I’m still training too). it was a 5 mile race. I set my gear on to 1 gear for the whole race and i finished second place! And it feels so different on a road bike too. if I had a choice to pick between road racing and track racing, I would do track.

In conclusion, i reallly like star track alot and racing too. both road racing and track racing seem fun and I really want to do more of it. This sport rocks!