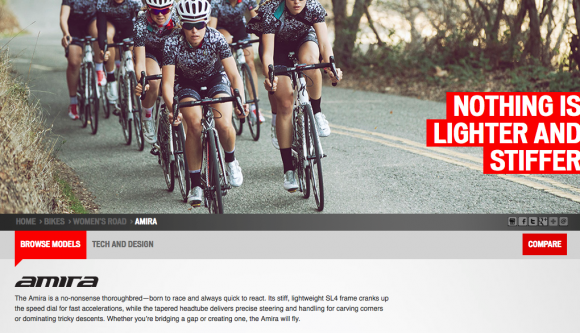 As part of their longstanding support of women’s racing Specialized is partnering with Century Road Club Association (CRCA) to sponsor the CRCA Women’s Race Clinics and the Women’s Development Series p/b Hatchmap. The partnership is built around the goal of encouraging participation in the sport via CRCA’s expansive women’s racing program – with each participant in the clinics and development series receiving an entry to win an Amira frameset.

The Amira is Specialized’s Women’s Performance Race bike – raced by some of the highest achieving women in the sport including former CRCA member Evelyn Stevens – and we hope that this innovative partnership helps to grow women’s racing!

Every racer who registers for the CRCA Women’s Development Series Races and women who participate in the Clinics (April 25th Clinic and June 21st Clinic) will receive an entry as part of the competition. Each time you register counts as one entry, so the more races and clinics you participate in, the more chances to win! For those women that finish on the podium of the development series races, the top three places for each race will receive extra entries in the amount of 3-2-1.

At the conclusion of the series we will draw one racer at random to receive an Amira framset (size of the winner’s choosing).