Ride in the New Year 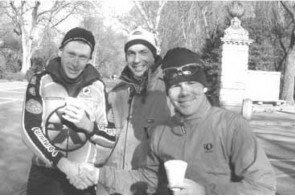 The Century Road Club is reinstituting the New Year’s Century Ride for 2010 as an official club event.

The event as always will start with two laps of Central Park and then head over the George Washington Bridge. Meet at Engineer’s Gate at 7:30. Bring a signed USACycling waiver. You will receive a card to get signed at the Bear Mountain Inn. The ride finishes at Engineers Gate in Central Park.

CRCA New Year’s Day and New Year’s Eve century rides go back to the turn of the last century. “It’s important for the club to maintain this vital link with club tradition and history,” commented Club President Mike Green. 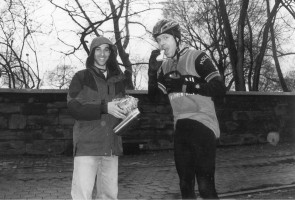 This year’s ride is a sanctioned USACycling Fun Ride. The cost to riders is free but a signed USACycling waiver is required. USACycling licenses are not required for a Fun Ride, but only licensed riders will be covered by USACycling’s supplemental medical insurance of up to $25,000. You must renew your license for 2010 before January 1 to be covered for this event.

As recently as 2005, the ride was an early season proving ground for the top club riders. The legendary Craig “Smilie” Upton rode strongly in 2004 and Todd Herriott who went on to ride pro for HealthNet and Colavita was a strongman in 2002. Justin Reid proved he was more than just an all time great junior British 5,000 meter track runner in 2003 and Thomas Pennell came home with the Paul Bunyanesque Alex Gulla in 2005. 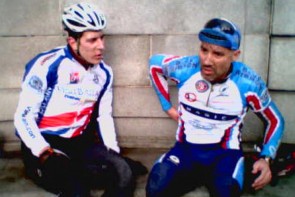 Alex Gulla and Thomas Pennell in 2005

In the February 2005 newsletter David Wagoner wrote “The New Year’s Day Ride has a rich tradition, dating back at least to 1898 according to the late Lou Maltese, when the Century Road Club Association broke away from the Century Road Club of America, and staged a wildly popular 100-mile race. Any racer worth his salt would- n’t dare miss it, and in fact, ancient scribes tell of a 1948 two-woman break which established a massive lead by the turnaround at Bear Mountain, only to be lost, either in the annals of Club history, or on the return Route 9W.
As the Club derives its name from this very ride, it in fact became a Club requirement in the ’50s and ’60s in order to establish one’s Club racing category.”
December 9, 2009
Axis Presents “Seven In One Blow”Homage to Patrick O’Donoghue
Sponsors