We’re excited to announce that the 2014 Orchard Beach Crit will be held on May 4, 2014 in Pelham Bay Park. Thanks to support from the NYC Parks Department we have garnered longer access to the venue – allowing us to run more fields than ever before, making this perhaps the biggest race on the CRCA calendar.

Schedule: Our preliminary race schedule is below – we have almost doubled the number of fields that we are running, thus allowing racers to participate in multiple fields throughout the day (sorry no multi-field discounts).

The 2014 Orchard Beach Criterium will be included in a number of CRCA’s open racing series:

For more information on each of these series please visit CRCA.net

The Orchard Beach Criterium will include four separate kids races.  Registration is free and must be completed via Bikereg. Also please note that a parent / guardian will need to sign a waiver the day of the race – please allow sufficient time to complete paperwork on race day. All participants in the Kids races will receive a medal. The Kids races and distances are as follows (fields may be combined depending on turnout):

Any questions on the kids races please email openracing[at]crca.net.  A special thank you to CRCA Member David Greenberg for organizing the Kids races.

The Orchard Beach Criterium is designed to be one of the most family friendly events in the region.

The race will be held at Orchard Beach in Pelham Bay Park. Pelham Bay Park is one of the hidden gems in the City Parks Department – it is the largest City Park and is in a beautiful location right on the water.  It is easily accessible by bike, train or car and is an extremely spectator friendly event – bring out the entire family for a great day of racing. From the NYC.gov website:

More than three times the size of Manhattan’s Central Park, Pelham Bay Park is the City’s largest park property. Visitors to the park enjoy miles of bridle paths and hiking trails, Orchard Beach, the Bartow-Pell Mansion, two golf courses, and a breathtaking 13-mile saltwater shoreline that hugs Long Island Sound. Athletes frequent its numerous fields and courts while children frolic in its playgrounds. Pelham Bay Park also has a wide and diverse range of plant and animal life and features prime locations to view one of nature’s most skillful hunters, the osprey. 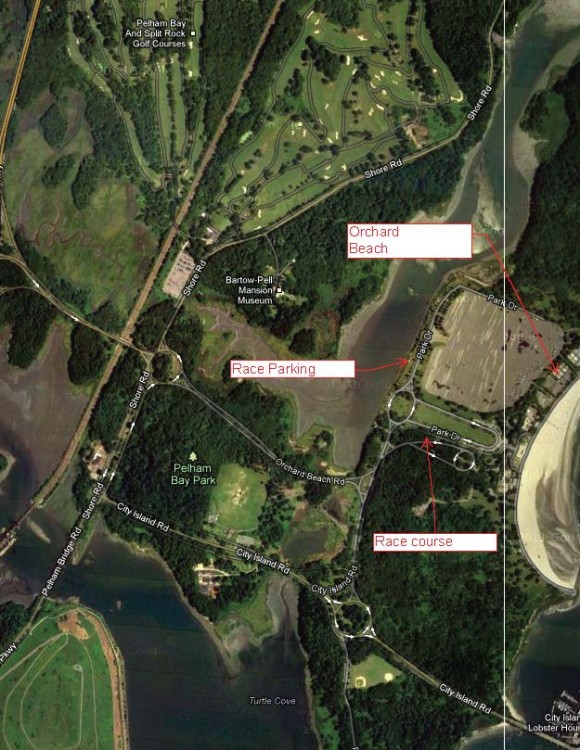 What a fun venue. It’s easy to get to by car, train or bike and the course is good and different so different from Central and Prospect Parks, with real corners…There was all kinds of action in this points race, with numerous groups going away. We were a bit out of sync, despite having a bunch of guys in the race — Eugene, Tim, Walid, Gary and JT, plus Paul in the masters. There were a number of promising moves, including when six guys joined Tim and another attacker — but we had no one in those six which was a big mistake. Adam Myerson of CRCA-Breakaway Courier Systems won, with really good sprinting from the field and from breaks, duly assisted by teammate Charlie Issendorf. Eugene was fourth and we were impressed by the horsepower of the Jet Fuel guys from Canada. 1. Adam Myerson – Breakaway Couriers, 2. Andrew Randell – Jet Fuel, 3. Josh Hall – Jet Fuel, 4. Eugene Boronow – CRCA-SCBC 5. Chris Chong Tenn – Navigators, 6. Dave Ebling – HVVC, 7. Steve Badger – CRCA-ReMax, 8. Inson Wood – CRCA-Keith Haring Foundation, 9. Lane Rodgrs – CRCA-Keith Haring Foundation, 10. David Jordan – CRCA-Union Square Cafe (34 starters; 35 miles in 1:20:31) 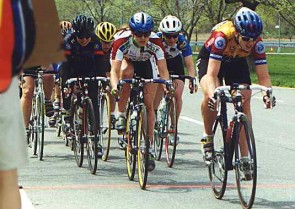