Mike McCarthy Inducted into US Bicycling Hall of Fame

Mike McCarthy who got his start in cycling with CRCA was inducted into the US Bicycling Hall of Fame on October 30. CRCA is very proud of Mike and congratulates him on this great achievement!

US Bicycling Hall of Fame – Mike McCarthy from Axiom on Vimeo.

Mike McCarthy is a seventeen time U.S. National Cycling Champion who earned numerous track citations such as five Jr. National Road and Track titles and the USA Cycling Athlete of the Year in 1990. McCarthy competed from 1982 to 1998 in various competitions including criterium, road, track and team pursuit races. He was a Pan American Games Champion (1987) as well as a two-time Olympic Games participant (1988 and 1996). McCarthy was also the 1992 world professional cycling pursuit champion.

John Tomlinson, one of the current club members who was around when Mike was in the club wrote the following tribute.

“How can you expect to do it in a race if you can’t even do in training?”

That was Mike McCarthy’s response to a question about why he was riding on a TT bike repeatedly going from the hooks to the aero bars and back every few seconds.

That focus on details is part of what made McCarthy such a special racer. He didn’t just have power and speed but the drive to work on the skills and little details that could make a difference between the winning and losing. And that focus paid off with 17 national titles, including a pro criterium championship, plus the professional championship of the world in the pursuit 1992. 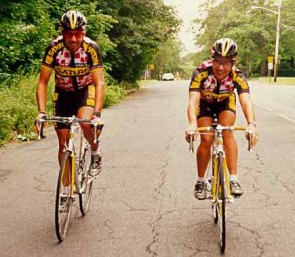 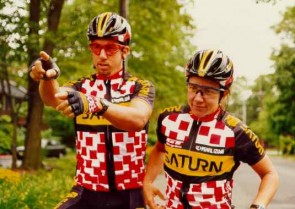 Mike started racing in CRCA club races as a kid, and over the years he rode for a number of important teams, including Suburu-Montgomery (which later become the US Postal pro team), Saturn, the U.S. National team, and the Olympic teams in Seoul and Atlanta.

He also rode for a Breakaway Courier Systems team in the middle of his career (alongside CRCA stalwarts Craig Cook, Ray Diaz and Kurt Gustafsson), and had a big influence on the rest of us locals with his attention to detail, calmness off the bike, and precision under pressure when on it. Watching him glide through a crowded field in big crits was a revelation for me. He showed that steely precision at the Killington Stage Race one year, while riding for the U.S. National team, taking the field sprint behind a small break on the first road stage. He’d ridden the last 200 yards in the saddle, near the edge of the road, with Malcolm Elliot of LA Sheriff’s pinned between him and the fence, pushing on McCarty with his shoulder trying to get by. “I’ve just got to hold my line. I’m under no obligation to let him by.”

Another revelation about the competition he was up against came when I saw him and Dave Jordan doing really explosive leg training at the gym. A friend pointed out to him that “the European pros don’t do weight training” to which he replied “They have other ways to maintain muscle mass.” Ouch.

Whenever he was back in town from racing around the country or internationally, local hotshots would have to take a backseat as Mike was just so much better. But he didn’t hesitate to share what he knew. And riders could learn lot just by watching him.

When you look at his results it’s obvious that Mike McCarthy had speed and power. For those lucky enough to see him up close or learn from him as he talked about the right ways to race and train (as a generation of CRCA racers did), it’s clear he put a lot more than that into his racing.

In the photos by Nara Garber, Mike is pictured with Liz Emery . Liz also started racing in CRCA and went on to have a good pro career which included a US National TT Championship.