Murphy winning the 3's at Hilltowns

Ann Marie Miller of Eumaeus Asset Mgmt – Fuoriclasse took 1st place in the elite women’s field at the New York State Time Trial Championship on July 21 in Cambridge, NY, and Carolyn Mills of Houlihan Lokey took the top medal and jersey in the 35-39 field.  George Suter of Die Hard – Think Racing took 1st in the 45+ men’s championship. David Carr of Setanta got 2nd in the 50+ field and the 3rd fastest time overall. Rob Rakowitz of Sids Bikes NYC got 2nd in the 35+ field, Rob Stern of Die Hard – Think Racing got the silver medal in the 55+ NYS championship, and Greg Olsen of Champion System p/b Stan’s NoTubes took the Bronze medal in the Pro-1-2-3 NYS Elite Men’s Field. 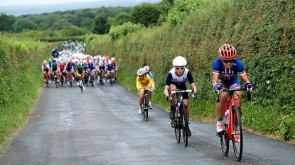 Finally, former CRCA member, Evelyn Stevens played an active role in the Team USA effort in the July 29th women’s road race at the 2012 London Olympics, attacking and helping to place her teammate, Shelley Olds, into the winning move of the race and then working hard in the chase when a flat tire took Olds out of the move. Reflecting back on the race in an interview for a story in Cycling News (link is here), she said, “We raced really aggressively. I thought the US was a big part of the race today. I attacked after the second time up Box Hill. Emma and I were off the front and Vos and Shelley were in the move. For me, I thought, ‘This is perfect. Shelley’s there, this is what we want.’ Unfortunately, she got a flat tire, so she dropped out of the break. So, we had to start attacking and chasing.”

Keep sending results and photos to communications[at]crca.net and we’ll try to keep up with them as possible with travel schedule!