Ken Harris on Breaking the Record 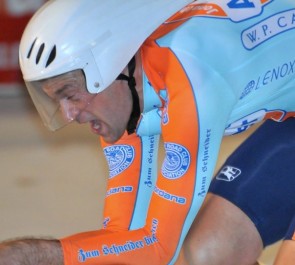 The start was at sunset, 7 pm. The weather was late summer, early fall cool. 65 degrees. The wind was minimal. The bike was a Cervelo P3C. The wheels, a Zipp 808 front and a Zipp 900 disc. The bar, stem and fork were from Oval. The fixed gear was 54×14. After carefully preparing for months, Ken broke Neal Stansbury’s record.

MG: Why? What got you interested in going for the record.

KH: Last year I managed to to qualify for the elite track nationals, and began doing some rather specific training for them — steady state maximal efforts on rollers. I managed a 385 watt hour right before nationals. After the elites, I started thinking about another challenge, and that hour effort stood out. I did a some ramp tests at Kissena in late October and realized that it was something I could likely do if I had the same form. Jason Sprouse had crushed the 35-39 record at Trexlertown that summer, so the idea was in the air. I saw on some message boards that other people were thinking and talking about it, too.

MG: When did you start planning for the record?

KH: I thought about doing it over the Winter, but I needed to go to T-town for testing. They were resurfacing the track, and it opened late. I basically had the form to do the record in March, but I had no tests on a proper track. Once the track opened, I began going down for Tuesday and Friday night racing, and I’d do some test runs on the open track as best I could. All that looked promising. I read over the rules, and began trying to contact the necessary officials. That’s the biggest hitch. I was hoping to make the attempt after a Tuesday or Friday night of racing, but getting everyone there on a specific night … timers, the UCI commissaire, USADA … that’s all my responsibility, and it never worked out. August 19th looked good, but then fell through. And I wanted to go through the process of setting the Kissena record first, and that got delayed.

MG: The training – How demanding was it? How different from your regular training?

KH: I trained a lot less this year than last. I just wanted to be in a good place to bring up my form when I needed to. Once I had a date, I did the majority of my training indoors. For me, it’s impossible to go deep enough on the street — to many dangers, too many distractions. August is always slow in my business, and this year especially so. That made it pretty easy to do the training and recover. I know that for me that it’s hard to stay motivated to go deep every day. Ideally, for the purposes of adaptation, doing a lot of 20 minute intervals would have been best, but I ended up doing hundreds and hundreds of negative short intervals, like 20/10 or 45/15 just because I they’re so hard that I don’t have time to think about stopping.

MG: Who held previous record? Had you followed Obree and Boardman?

KH: Dr Neal Stansbury set the record in Manchester during the master’s worlds in 2003. I introduced myself to him at T-town — he lives nearby. I was hoping that he’d making it out for my attempt, but I was told he was in surgery.

I think you’d be a fool not to study what Obree, Boardman, Merckx, Moser, Rominger or Hutchinson did. Most attempts fail. I’m told that Dr Brent Kay (Floyd Landis’ Dr) went after Stansbury’s record three times and never got it, for instance. You have to have the engine, you then have to get the form, and then have to line up all the officials and the venue and the timing and the testing for the specific day you chose. You give yourself this problem: it’s your fault when it fails. Any one thing can make it fail. Anything. You have to study the problem.

MG: What was involved in setting up the attempt? What kind of help did you get?

KH: My wife Constance indulged me in the attempt, and did all my timing for me and called my splits. My coach Matthew Koschara attempted to keep me from losing my mind, and helped me with the details and the general plan. Shawn Farrell at USAC takes care of contact with the UCI — that guy is on top of his job like no one else. I had to get the officials. I was supposed to have Paula Grill, but a date change forced Andy Taus to be the commissaire. Ellen Dorsey helped with that. Erin Hartwell and the staff and Valley Preferred Velodrome helped with the making the track available for late testing and the attempt. Phoenix Sports did the timing. Cadence helped with the bike and gear. My team helped me celebrate and tolerated me while I was not drinking. Patrick Littlefield and Matt Pascale lent me wheels. Thanks to all!

KH: Even at about 30 fewer watts, the Kissena hour hurt a lot more. The track takes its toll. I knew that if I could get within a kilometer at Kissena, I would take the record at T town. I was a few meters short, but close enough.

KH: I had a schedule which put me 500 meters over the old record. Constance stood on the back straight and timed me from the home straight, so I was getting splits from a half lap back. I went up on my schedule for the first third, and then started to go even, then slowly went down, ultimately about six seconds. I have a pretty good sense of pacing, regardless. In efforts like this, I look at the SRM just to see how much time I have left. Data is something to collect and analyze after the fact.

The effort is relentless. The position I’ve worked out doesn’t allow much adjustment fore-aft, arm angles, or anything but where I put my thumbs. There’s only one best line, the cadence is dead on the same. It just eats at you. You’re in one position at one pace on one line and you just have to get used to it, but not too used to it, or you slow down. I had to cycle through every mind game I have to keep me going and focused. Between 30-40 minutes is the worst. You really don’t wish that part on anyone. Between 30-40 minutes in is just close enough to deeply, deeply fail.

MG: I ran into Tony Slokar in the park last night and he told me that USADA showed up at your house at 3am.

They left at 3:30 AM: they showed up around 1:30 AM. My downstairs neighbor thought the police were in my apartment with all the foot traffic! I’m all for this. The sport is beginning to gain back its credibility. I attempted this record because it was on the outer limit of what I could do. Not outside, not well within. It was a challenge. I got as close as I could to experiencing what it was like for a real athlete to take on an unconditional record. If I cheated — if failing wasn’t a immanent, palpable possibility– then there’d be no point. You don’t get anything for doing this. They put your name in a book. A while later, they put someone else’s name.

MG: Future plans? Any other records in sight?

The hour record is the last thing you do, isn’t it? I’d like to do more things just for fun. I like racing the track — I want to do some madisons. Madison adds that motorsports aspect of reflexes into it. Things happen really fast, and that keeps you focused. Otherwise, I’d like to help with the CRCA junior program. This is a great sport. It teaches you to work with what you’ve got. I went pretty far with what I got.