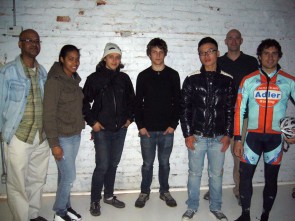 The CRCA Junior Development team held its kickoff meeting on Saturday, November 28. Coming off a successful 2009 season, led by returning rider BenSalibra,the team is looking to score significant results in the major junior races in the northeast.
Ken Harris, who will be returning as the head team coach was joined by Kyle Peppo who will be helping out this year.
Ken and the team members present, discussed the major goals for the year. The team is shooting for success at Battenkill, Bear Mtn, Fitchburg and if possible l’Abitibi. Trips to Nationals in Oregon will be determined by how the season progresses. Getting the team to the races is the major organzing goal and challenge. Several team member parents attended the meeting and offered their assistance.

Besides continuing progress on the road, the team is looking to do more work on the track. A trip to the track in Hamilton, Ontario is planned for early February.
This years team adds a core of riders based in the city to the returning upstate duo of Ben Salibra and Jacob Gorke. Cooper Ray leads the city contingent with track standout Gabriella Allong returning to the team. Fourteen year old Samuel Morkal-Williams has shown amazing potential. Eli Mernit and Wei Chen are new team members.

Developing a competitive junior team while getting more juniors riding is a high priority for the club.

All agreed that the team needs to communicate its efforts and results more widely to the club as the expansion of the team is partly dependent on member donations. A separate web-page or a section on www.crca.net will be setup for the Juniors.

The “Men in Plaid” roller race put on by nyvelocity raised $900 for the team. Team member Cooper Ray showed very smooth pedaling form in the competition.