1) Tell us some about what got you into racing, and what kind of athletics you did before.

I have always enjoyed the effort, the sweat, the team camaraderie, so sport has been part of my life as long as I remember. As a teenager it helped me contain my door slamming skill at home, and I enjoyed not being bad at it. I was part of many teams. My favorite one was the track team and I went to the French national school championship for discus. At the university I tried rowing and joined a boat of 4 women that finished 2nd in the French national collegiate championship.  When I started working, I ran because I had a boyfriend who was running marathon. When I came to New York, I swam because there was a pool in my school. During those various life stages, sport was not a focus, it was just something I was doing on the side because I liked and needed the physical activity. During those years, my main focus was academic. I was also smoking quite a lot and I was doing my good share of late nightlife clubbing.

My father getting sick was an emotional landslide that also impressed on me the importance of good health. In 2007 I decided to focus on my health as soon as I was done with my Ph.D. dissertation. To stop smoking I radically changed my life style of staying up at night, of writing, of going out, all those life habits that I had and that were associated with smoking for many years. I started the “detox” over the summer while I was in my little village in France, surrounded by nature, and helping my mother taking care of my already very sick father. One day that summer I noticed my father’s road bike standing in the corner of the cellar, and I started to go for rides on it. It was a way to be on my own in the outdoors, a way to feel close to my father who used to love cycling with his buddies on the weekends and who brought my sisters and me as kids to watch the Tour de France. Riding his bike gave me some relief. It felt like the speed, the wind, the passing landscapes, and the silence made my too heavy emotions a bit lighter. 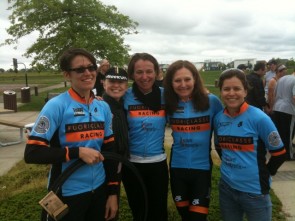 When I came back to New York after that summer, I saw my colleague Brian Kivlan coming out of the building with a bike and a sexy colorful spandex outfit and killing sunglasses: “What are you doing?” “I’m going for a bike ride.” “A bike ride in New York City?” He explained about the Central Park loop and the George Washington bridge. Riding a bike had been such a salvation for me during the past summer that I immediately said “I want to go for a bike ride with you”. Next thing I know, I am in a bike store with Tom Bolster, another super cyclist colleague, and he helps me choose my first road bike, white and pink, just awesome.

Kiv encouraged me to do the SIG program in the spring of 2008 with the New York Cycling Club, and so I did. First there were the falls on the new clipless pedals which my great mentor Mitch always saluted with the best laugh. Then each week there was the same pre-ride night anxiety: Will I be able to keep up with crazy Ben Cornish and Peter Conroy, my fav buddies in that SIG-classic group? But I loved the challenge of every ride! When I graduated from the program, Mitch, said, “There is a women bike racing clinic in 2 weeks. Why don’t you try it?” I thought, a race, sounds exciting, why not? So I went to the clinic organized by CRCA, and I won it. I immediately loved racing, the speed, the burning legs, the total focus. I then met Colleen and Etsu, and they asked me to join the Teany Cycling Team. I started racing with Teany in March 2009.

After the awesome SIG and that first race, there was no doubt in my mind that bike racing would from then on become a big part of my life. I was 37, I had discovered a new passion, totally unexpected.

2) From the start, you’ve had some big achievements in bicycle racing, from finishing first in the women’s clinic (in which Evie Stevens was also a participant as a potential, future racer) and winning your first out of town race (Battenkill, 2009) to racing well in NRC races in 2011 and winning the women’s pro-1-2 circuit race last weekend at this year’s GMSR. Have there been any down times amidst all this, where it’s been particularly tough, whether in a race or a part of a season?

Seneca thought that “luck is what happens when preparation meets opportunity”, and in that sense I feel that I have been very lucky with bike racing since I started. First of all, I have been most lucky to start and develop my training with David Taylor, a born King of the Mountain (GMSR 2011, 40+ field). But there are no ups without downs, it is for everybody the same, so inevitably there are many stories of down times too: I have a tough time with myself when I do something stupid in a race. A tough time also when I can’t train because I’m injured or because I have overdone it a bit and can’t recover fast enough (the privilege of age). A very tough time last season when I was on crutches for 2 months because of a crash – just the logistic of dealing with myself on one leg was a tiring circus – try to bring a cup of coffee to the table while hopping on one leg, quite explosive, uh? More generally, races seem to follow a movement of ups and downs for me: at almost each race, there is a point where I think “what I am doing here, it is so hard, I feel like a donkey anyway today, I just want to lay in the grass and look at the sky”, and then I wish that my chain would explode, or that I would be attacked by a big bear, anything that would just stop the race… 3) Talk about a particular example when things got tough.

This year I did my first two NRC races, The Philadelphia Liberty Classic and the Tour de Toona. The Tour de Toona was by far the toughest race I have done. My body and I will not forget the long road race and the crit.

The road race was 91 miles long under a saturated July heat. At mile 50, little climbing goats attacked Blue Knob hill as if a horrible monster was chasing them.  Well a break was in the front. I tried to stay with them, but after some minutes, I blew up, not literally, but you know that moment where your body says “This is it, I can’t play the game no more”. Suddenly I had nothing in the legs, and I started to cramp very badly, in both quads, at those inner muscles close to the knee. So painful. It was the first time this ever happened. People started to pass me; I don’t know how I reached the top of that 4 miles climb. At the top I couldn’t do anything, I looked back and waited for 2 girls. In the descent we tried to get back to a group a bit ahead of us, I could not help at all, I was cramping each time I was pushing on the pedals. There were still 2 QOM’s to come, and I was thinking “how I am going to do that??”. Slowly I recovered a bit, but cramped on each QOM. I finished the 91 miles; one can actually finish a bike race without legs ;-)

The next day was the final crit of the stage race. It was a mad house. So fast. My goal was to not get lapped, so that I could finish the stage race. Unfortunately I crashed over a girl who crashed in a corner in front of me. My shorts got all ripped off, skin, blood, a dismantled wheel, but nothing broken, so I ran with my sexy bloody butt and my sweet indestructible Caad 9 on the shoulder to the SRAM pit on the other side of the course. I got a new wheel, and it started again, the crazy pace, the mad cornering. I was at my limit the whole time. I was counting every lap. And I finished it! 30 girls did not. At the end, I finished 26th in the GC. Nothing glamorous. Definitely the hardest race I had done. But it was also my favorite race so far, the one I’m the most proud of. Because it was so incredibly hard and it challenged me in ways I had never been challenged before. So, tough can be good as well ;-)

4) As you’ve moved up and dealt with these ups and downs, what are some things you’ve learned really work for you in training and racing? Is there something different that you’ve tried that really made you able to take a step forward?

I can’t think of anything in particular, no miraculous tricks (aside from my beautiful red toe nail polish that definitely makes me faster – forget the carbon sole shoes hype, really!). Consistency has always been the best recipe for improvement. Tenacity and learning from the downs are important as well. And focus, the focus of giving 110% in training, and an absolute focus in races. I have learned to leave no place for excuses or regrets because they are completely useless. Finally I think that I have been learning a lot about racing by watching many races on the computer, in observing and trying to understand the various games going on in races. In the Women Pro/1/2 field, when you don’t have any teammate to race with, winning a race is only 60-70% in your physical preparation. But I feel that I am only at the beginning of the process. I don’t have a good sense yet of what works best for me in terms of training – like in anything, it can take several years to have a good sense of what works and is best for you. 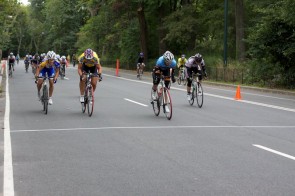 5) Now that this season is drawing to a close, what are your hopes for the next?

I hope to improve my watts, and my power to weight ratio – which I have not done much this season. I hope to find training buddies that will challenge my limits. I hope to experience doing a solo breakaway in a race – something I have never done. I hope that from the start of the season, CRCA could have a Women 1-2 composite team so that we get better support to enter the challenging NRC races. I hope that each of my teammates at Fuoriclasse Racing will have an awesome and very rewarding season 2012, and that new sponsors will join our very dedicated group and help us develop as a team. And many more secret hopes, of course!