Inside the Mengoni Grand Prix 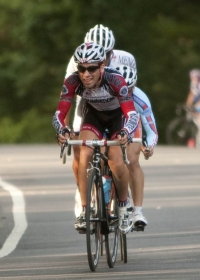 Today we rode as well as we could in the Mengoni GP, arguably one of the most important races in Central Park all year. From the gun a break including Ken Harris of team Adler got a large gap of about 1 minute. After about 2 laps of the field chasing and slowing, chasing and slowing I decided to try my luck at attacking. Going up Harlem Hill with 5 laps to go I unleashed a hard attack, I was soon pulled back on the decent but had caused the field to string out quite a bit and Lisban quickly counter attacked causing further damage to the field through the rollers on the upper west side. His group too was brought back by the field but I could tell the rubber band was stretching so I hit the field again going up the hill to Tavern. This time I had successfully caused a split of about 13 to 15 riders. Within a lap we had brought back the break with Ken H. in it. Now we were quite a big group, with 3 Adler riders, 2 Mengoni, 2 WS United plus a few more.

I knew my chanced in a big group were not as favourable. With 4 just after Tavern Ken H. and his team mate Tony Hall rolled off the front of the group due to too many riders not wanting to do their share of the pulling. I quickly realized this and jumped across to the two of them with Rafael Mera coming across just behind me. We quickly got into a rotation and built up a sizeable lead of about a minute or so. With 2 laps remaining Ken H. I think started to feel the pain of being away in a break for the entire race and fell off the pace leaving just the 3 of us. With the high pace we kept the entire race I couldn’t really find the right point to try to attack away from my break away companions.

Coming in to Cats Paw the Adler rider started his sprint just a little too early. I tried to capitalize on Rafael being on the right side of Tony’s rear wheel so I jumped hard on the left to start my sprint. Rafael was able to come back up to me and we were neck and neck until the final 50 feet or so where he just started to pull away from me to take the win and I ended up in 2nd just behind him and the Adler rider rode in 3 seconds later. Lisban was able to take 4th place in the field sprint today to take 7th place and Gavin finished right outside the top 10 in 11th.

This was an excellent result for me, especially after getting the CRCA Club Champ last weekend. To be able to be consistent and ride well again this weekend was very satisfying for me.