Your contributions to the Century Road Club Development Foundation (a tax-exempt entity) are used, in part, to fund its Grant Program, which gives financial support to members of the CRCA Junior Development Team to allow them to participate in regional and national level races. The juniors apply with a specific race in mind and the Team covers the majority of their racing costs. Recently, the CRCA Junior Development Team traveled to the 2015 Tour de FCCC. Here is Justin Strauss’s race report in his own words.

To support the CRCA Junior Development Team, please donate here (membership login required) or contact Matthew Vandivort at clubracing[at]crca.net, and to find how you can help (volunteers/leaders are needed for coaching, ride leaders, marketing, sponsorship, etc.). 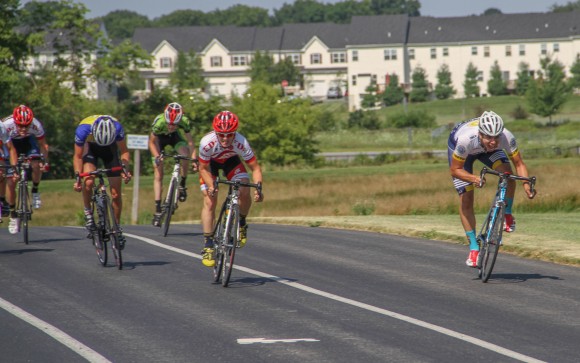 Kaan Sprints in the Crit

The Tour de FCCC stands for the Future Cycling Champions Classic and is unique in that it is one of the only annual all junior stage races in the country. It’s held in Pennsylvania’s Lehigh Valley (near T-Town) and marks one of the final stops of USA Cycling’s Road Development Race Series calendar. This year, the race conflicted with the Tour of the Catskills, but since this is my last season as a junior, I opted to race the last Tour de FCCC I’d be eligible to compete in. Kaan and Andrew joined me by staying overnight at the Kutztown Main Street Inn, one of my favorite bed and breakfasts, situated just 10 minutes from the races. 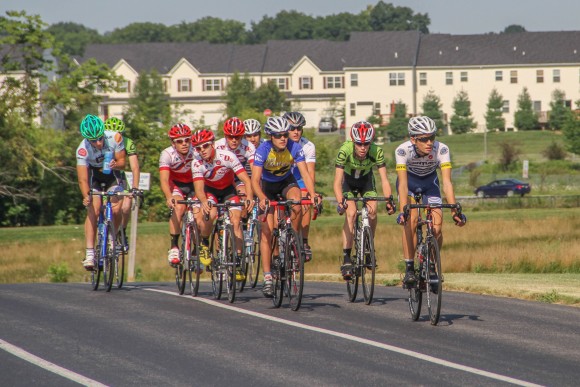 I woke up to the sound of Kaan’s footsteps walking around the bathroom one floor above my room. He and Andrew left early since he had to register day-of and Andrew’s men’s 15/16 race started earlier than our 17/18 field. I stayed behind at the B&B to indulge in a not-so-light breakfast of oatmeal, yogurt, fresh fruit, and the innkeeper’s signature creme brulee french toast. The criterium is held at the Bob Rodale Cycling and Fitness Park, across the street from The Velodrome. It’s a one mile course with one short climb and no true corners, making it more like a short circuit race than a criterium. I hadn’t warmed up and lined up at the start line with Kaan amongst our small 10 person field. Like most other junior races, the pace started off easy. I ended up pulling the field for the first couple of laps and even tried breaking away with a Cannondale Sports rider to no avail. After the field reeled us in, one of the Young Medalist riders launched an uphill attack and his teammate counterattacked, eventually breaking away solo. The following lap, Kaan decided to make an attempt to do a solo bridge up to the breakaway. I moved to the front and slowed my pace to try to prevent the field from following him, but most of our competitors caught onto his wheel and I was left in the dust along with two others to form our own chase group. Just past the halfway point of our 20 lap race, the rider who broke away lapped my chase group and then went on to lap Kaan’s six person main group. With a couple of laps to go, we noticed that we were about to be lapped by Kaan’s group as well, but we stayed about 30 seconds ahead of them going into the finish. I won the sprint among my group of riders, but still ended up over two minutes behind the leader, in 8th place. 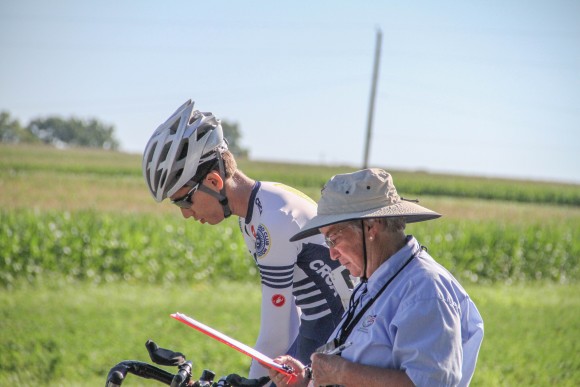 Justin checks in with the official for the time trial

I learned my lesson from the previous morning, giving myself adequate time to warm up and opting for a much lighter breakfast. Stage 2 is a 4.2 mile time trial on a rolling course with three short, punchy climbs. To prepare, I wore a skinsuit and shoe covers and outfitted my bike with aero bars and climbing wheels. Kaan and I were assigned the last time slots, so we were also able to sleep a bit longer. I was off a 8:51:30 AM and picked up speed pretty quickly, getting into a rhythm at about 28 miles per hour. Near the halfway mark, Kaan bridged the 30 second gap separating us and caught up to me. As we ascended the three consecutive climbs, we stayed within a few bike lengths of each other, being careful not to break the rules and accidentally draft. Having Kaan just up the road served as a positive motivator to help me dig deep and try to close the gap during the final minutes of the time trial. I ended up finishing 7 seconds behind him and improved my time compared to last year. 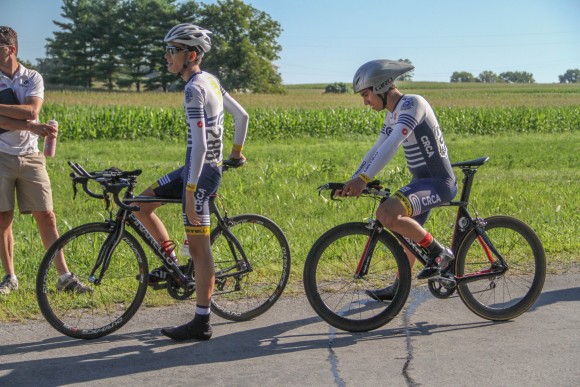 Justin and Kaan were the last two riders to go off

The same group of 10 lined up for the road race, which is a 29 mile race consisting of seven laps on the time trial course. A few hours had passed since the prior race, so by then it was midday and temperatures hovered in the high 90’s. The surrounding farmland lacks any trees to shade the pavement, so there is no respite from the beating sun. The field stayed together, for the most part, during the first few laps. All attempts to go off the front were chased down to prevent a breakaway from forming. One of the less experienced Young Medalist riders (not the same one who won the criterium) lingered off the front going into the finishing straight with four laps to go. This time, the Cannondale Sports rider went to chase him down and rather than taking the field with him, the two of them stayed off the front. After a few minutes, we realized that they couldn’t be seen up the road anymore and their pace wasn’t letting up, so the chase ensued. The seven of us that remained only lasted as a group until we hit the three climbs. One rider went off the back on the first hill, Kaan peeled off on the second one, and I was the last to go on the third pitch, leaving only four riders chasing. I ended up riding solo for a couple of laps and in a fashion similar to the time trial, Kaan eventually caught up to me. This time, we were able to work together, taking pulls until the finish. And just like that, my three year run of racing the Tour de FCCC had come to an end. 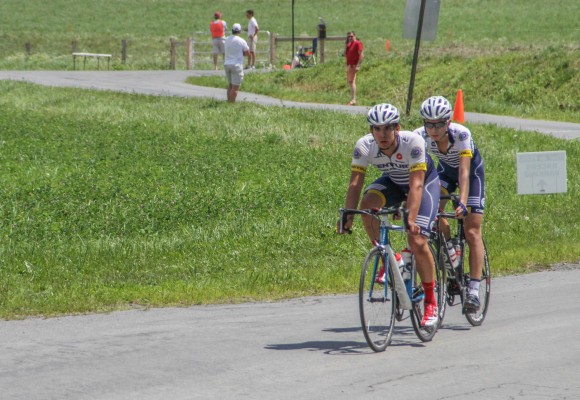 Kaan and Justin during the road race 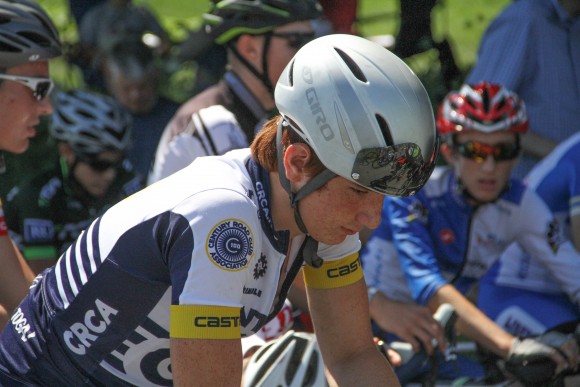 Andrew lines up for the road race 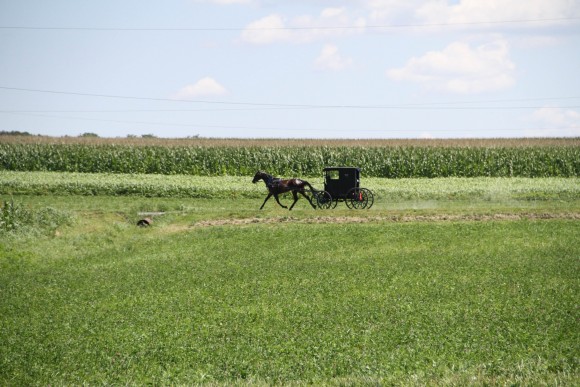 A horse and buggy traverse the race course 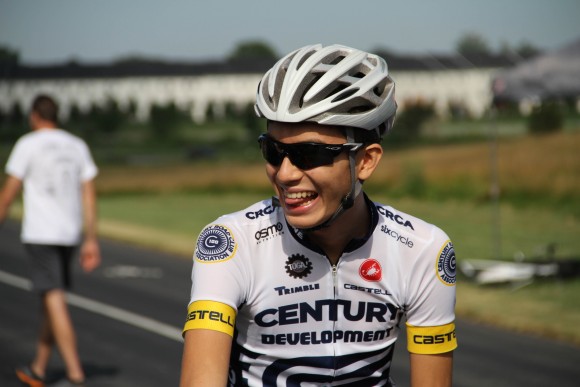 Justin at the start of the Crit 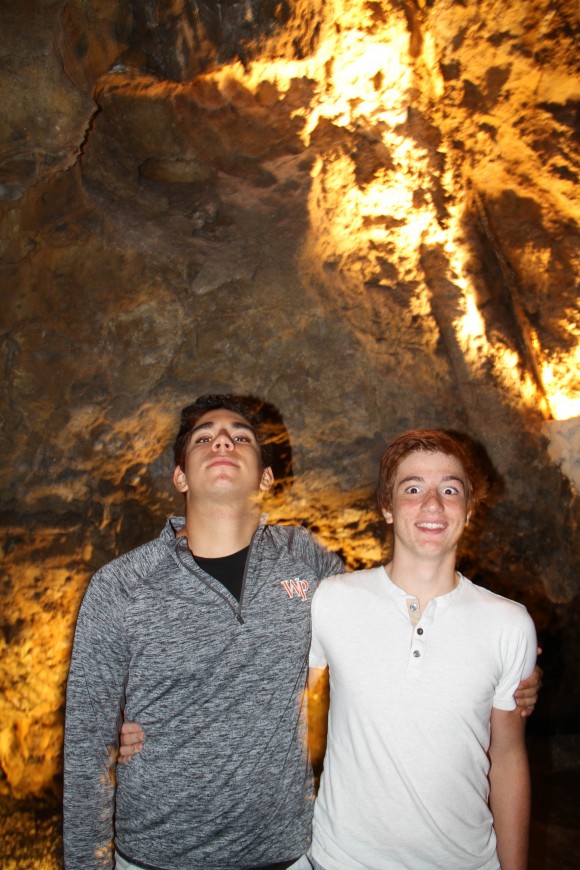 Kaan and Andrew cool off post race in the crystal caves