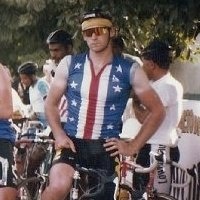 What do you do when you lose the legend?

When our leader and mentor, Dave Sean Jordan was taken from us by a brain tumor last July, in addition to the pain his loving family was forced to endure, the entire New York City bike racing community was also sent a vicious blow. We all mourned the man who had far-reaching impact on our personal and cycling lives. And as a team founded by our leader, with our leader’s name, built on the foundation of his coaching expertise, we faced the daunting question of what next?

A couple of months after Dave’s passing, his wife, Aytul, and I sat down over a cup of coffee and discussed what she wanted to do with the team. From her point of view, there wasn’t a choice; we simply had to continue. We quickly agreed that the team’s objectives would be to uphold the ideals and values that mattered most to Dave: teamwork, esprit de corps, and the love of competition. But without Dave, coaching would no longer serve as the driver of our team.  Moving forward, we were going to be all about the racing. As a result, we would have to change our name.  Instead of CRCA/Dave Jordan Coaching, we would evolve into CRCA/Dave Jordan Racing for the new season.

Incumbent on all teams, is the necessity to strike the right balance of personality and shared vision for the future.  To honor Dave’s intense competitive drive, we started by securing our Elite Team with existing team members.  The always powerful and crafty Tony Taylor, former Jamaican and U.S. Master’s National Champion, would serve as our anchor. Lynn Murray, 2005 and 2006 Antigua & Barbuda National Champion, and David Wiswell, former Junior and Espoir U.S National Team member, would provide speed and experience. Lastly, Dr. Colin Prensky, would provide another potent option for the sprint. Fortuitously for us, newly signed and unknown Chris Strumolo, would quickly rise to be one of the great success stories of the 2013 season.  With these guys, along with Alan Buday, John Olsen, and myself, we knew we would remain in the game. 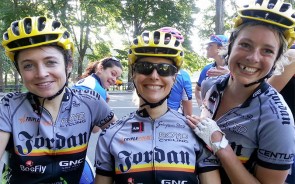 But that was only part of the plan. Dave Jordan was always about development and supporting the growth of women in the sport. We simply had to continue with our Development Team and Women’s team.  While a few of our existing riders decided not to continue, the core group remained the same and by adding a few more riders, we assembled teams that were committed to grow and develop.

Licensed USCF coach and Elite Team member Alan Buday, who also possesses considerable talent on the track, road, and in cyclocross, offered to provide the coaching. This is foundational for us.  Dave Jordan believed in the code.  Anybody who has trained under Dave’s tutelage knows that there’s a right and a wrong way to ride and race.  As with the team honoring his legacy, Alan has continued the process of grooming riders into racers by providing weekly team training sessions in Central Park.  These sessions also have helped us build unity and while often physically demanding, have been a great deal of fun and richly rewarding. 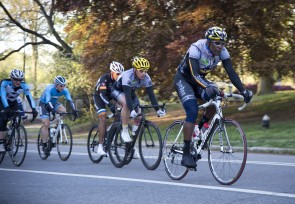 The next objective was to procure corporate sponsorship funds to augment the seed money. With the tremendous efforts of Tenley Cederstrand, Dave’s sister, Nigel Hall, our Business Manager, and team members Brett Halpern and Maria Rosenfeld, we were able to procure additional funds and deals on cycling product. Within a couple of months, we had our roster set, sponsorship in place, new kits ordered, and were training as a team. 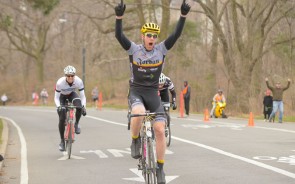 Having just marked the one-year anniversary of DJ’s passing, it gives the entire team reason to reflect on our successes.  Some of these include Chris winning at Battenkill, Tony taking fourth at the Dave Jordan Central Park Classic, Anna and Maria finishing on the podium, Greg winning a Lucarelli and Castaldi Cup race and George taking a 2nd place at Orchard Beach.  We have proudly earned top ten finishes consistently each weekend. But what is most gratifying is the knowledge that we continue to celebrate Dave Jordan’s passion.  Yes, the legend is gone, but his powerful legacy endures. 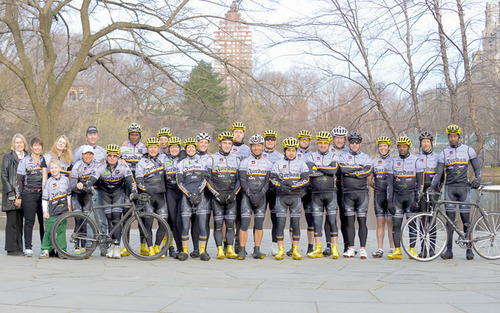