As part of our revamp of the Club’s Open Racing Calendar we thought it would be helpful to provide a brief overview of CRCA’s 2012 Central Park Open Racing calendar.  In response to feedback from the Club’s 2011 member survey we have added several open races to the calendar, structured events to maximize available upgrade points and added ancillary competitions such as the Harlem Hill KOM Competition.  See below for the summary of our 2012 Central Park Open Racing Calendar.

The Central Park Classic presented by Accelerade and 2nd Surge is a brand new open race on the CRCA calendar.  The highlight of this event will be a points based KOM competition at the “summit” of Harlem Hill – giving climbers an opportunity to shine in Central Park.  More details on this competition will be posted on the race web page.

The event will also play a role in multiple open racing series including the SID’S Bikes P/1/2 Series, the Accelerade and 2nd Surge Cat 3 Series and the Bike Doctor NYC Women’s 3/4 Series.

The Lou Maltese Memorial returns for 2012 with some slight changes to the field structure and a new sponsor in Lucarelli & Castaldi.  This highlight of the Lou Maltese Memorial remains the Team Invitational that will be contested by some of the region’s elite cycling teams.  In addition all of the fields except the Cat 5 will also have the opportunity to compete for cash premes, insuring aggressive racing throughout.

The Lou Maltese Memorial p/b Lucarelli & Castaldi will be included in the Accelerade and 2nd Surge Cat 3 Series. 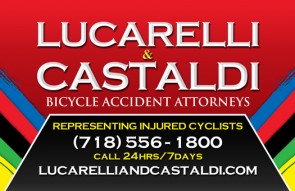 For 2012 the Mengoni Grand Prix moves back to it’s traditional August date, allowing us to lengthen the race duration for all fields compared to the 2011 edition.  Otherwise the structure for the Mengoni Grand Prix remains largely the same – as one of the most prestigious events on the New York City racing calendar there weren’t many changes to be made.

The Mengoni Grand Prix will be included in the SID’S Bikes P/1/2 Series, and the Accelerade and 2nd Surge Cat 3 Series

The 2012 Central Park Open Racing calendar will conclude with the new Lucarelli & Castaldi Masters Throwdown.  This new open racing event will allow the region’s Masters races to compete in Masters only fields while CRCA members will also be able to compete for the title of CRCA Club Masters Champion.

These races are made possible thanks to significant sponsor support.  Please visit the CRCA sponsorship page HERE to learn more about the Club’s sponsors.

These Central Park races are just one aspect of our significantly expanded open racing calendar for 2012.  We have also added events at Floyd Bennet Field and an Alpine Hill Climb ITT and we’re always working on new venues.  For more information on the Club’s racing calendar, please visit: http://archive.crca.net/racing/schedule/.  Please contact Matthew Vandivort with any questions at openracing[at]crca.net