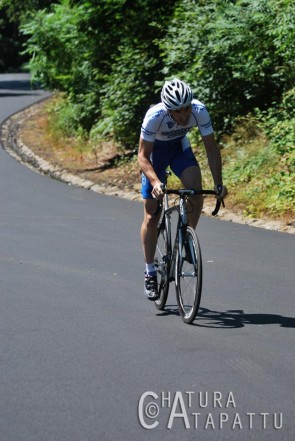 The CRCA Alpine Hill Climb (open race) brought blazing fast times (many new records on new pavement), with an overall win in the Men’s 1-2  by Brian Dobes of Westwood Velo in just 4’36” followed by Michael Boardman of BH Comedy Central in 4’41”. Daniel Crespo of Cycle Life got 2nd in the men’s 3’s in 4’49. Suzanne Lucash of CyclelifeUSAGFCapital raced the fastest woman’s time in the women’s 1-2 field with a 5’32” followed by Annaliese Haines (5’40”) of Innervation Fitness/Stan’s NoTubes. Brittlee Bowman of Innervation Fitness/Stan’s NoTubes won the women’s 3 field with the next fastest woman’s time of 5’49” (see below on her top finish later in the day at the Cielo Crit.!) followed by Carol Lynn Mills of Houlihan Lokey in 6’22”.  CRCA members took the top 3 spots in cat. 4 with Daniel Flores of Houlihan Lokey first, Maurico Sanches of Foundation 2nd in 5’10”, and Alexei Zakharov of Siggi’s NYVelocity in 5’11”. Lucas Van Drunen got 3rd in the Cat. 5 with 5’28”.  Ken Harris won the single speed competition with a 5’05”. Full results are here. 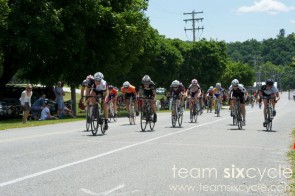