There’s still time to sign up for the CRCA Orchard Beach Crit via Bikereg, but we’ve compiled the Road Results predictions along with our own thoughts here. As the biggest race CRCA has hosted in over five years we’re excited to see how all of the action plays out. 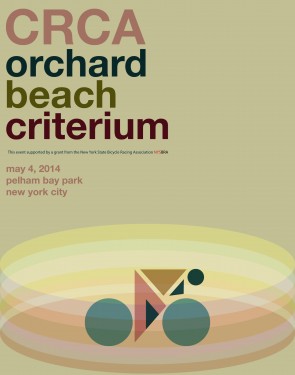 Last year it was Zach Koop out sprinting Neil Bezdek for the victory at the Orchard Beach crit but the Road-Results.com race predictor doesn’t give much credit to the defending champion who slots in at just 13th in this year’s expected results. Instead the win is predicted to go Stalin Quiterio Cuello who is coming off a recent win at the Spring Series, albeit it one with just 11 other finishers. That said this is going to be one of the toughest CRCA Open Race fields in recent memory – including Rodrigo Echeverri Conde, winner out of a stacked field at the 2013 CRCA Dave Jordan Central Park Classic, and Evan Murphy who is returning from Speedweek and will be leading a big Foundation team that includes Bezdek, Alejandro Guzman, Abraham Soler and Dan Chabanov. Perhaps this big Foundation squad was sufficient to scare off the Weather Channel Team who, despite their recent impressive form, is nowhere to be see in the Orchard Beach registration list. There are plenty of “underdogs” to choose from on the Road-Results.com rankings, but we’re going to go with Stephan Hoffman who has been on fearsome form as of late, but still slots in at just 11th in the expected results. We’re equally intrigued by 2012 Orchard Beach Crit champion Greg Olsen who is racing once again – he often needs a certain type of race to get the win, but has a good shot at taking home his second Orchard Beach title. Whoever comes out as the victor, with this stacked of a field it should be an exciting race to watch.

Similar to Grant’s Tomb the Men’s 2/3 is once again one of the most popular fields of the day with the race predictor pointing to the CRCA President himself, Jayson Jacobs, as the victor on Sunday (no bias in the results at all!). Though with his best finish in 2014 a tenth place at the Tour of Battenkill (according to the Road-Results.com race predictor at least) it remains to be seen whether his crit form can deliver him the win following a more marginal 27th place finish at the CRCA Grant’s Tomb Crit. Expected second place finisher Roger Montes hasn’t raced much this year but did finish on the podium at the Rahway River Park Crit and so is as viable of a winner as anyone. Other expected top finishers include big Willie Payton and Roger Parmelee though our underdog pick is going to Robert Lattanzi who spends most of his days as a worker on a very strong Lupus team but we think might find a chance to shine on Sunday.

The Men’s 3/4 field currently stands as the largest of the day with 91 racers registered. Out of this big peloton the Road-Results.com race predictor judges Samuel Frias as the likely victor which makes sense given Orchard Beach is a race that he is familiar with – having finished 9th in last year’s masters field. The predicted podium is rounded out by Higinio Rodrguez who enjoyed recent success at Bethel with a third place podium finish and Eutimio Quintero who finished 5th in last year’s Master’s field. For a likely crowd favorite, we’re going to go with non-other than Eben Weiss aka Bike Snob who is predicted to finish fourth in what the Road-Results.com race predictor judges to be his first race since the 2011 Tour of the Battenkill.

Another large field featuring lots of CRCA racers, the supercomputers predict that Jacek Boral will outpace the M4 field to take home the win ahead of Kyle Herlihy and Julian Banks. A bit further down the list Colin Tanner is coming off a solo win at the Bethel Spring Series and is expected to finish 8th. For our underdog pick for the win however we’re going with two races – Mark Steffan who scored a 13th place in the M5 field at Grant’s Tomb and Richard Bravo who we think has more in the tank than his 70th place finish at Battenkill shows.

In last year’s race a break led to a win by Laura Summers – although the defending champ is racing again this year, the Road-Results predictor has Lauren Dagostino on top. Interesting choice but my money would be on BrittLee Bowman or Aimee Layton, whom are predicted to come in second and third, respectively. With Kristin Lotito making a comeback this year, it’s possible she could make things very interesting as well. Needless to say it is a stacked field and should be a lot of fun to watch.

The race predictor has Masha Schneider of Zenberry coming out on top, which is interesting – she had a good couple of races at Orchard Beach last year, and certainly races enough to throw down some tactics. That said, Jen Nordhem, predicted in second, is an excellent strategist and also did well here last year. Rounding out the predicted podium is Victoria Brumfield, who has been sprinting well. If this race ends in a break it wouldn’t be surprising to see Masha or Jen on top, but in a field sprint Victoria could certainly pull it off.

Isabelle Cote and Victoria Gochenour are both looking for their last few points before taking their chances on submitting upgrades, so their predicted finishes as second and third shouldn’t be too controversial. The supercomputer has Marissa Acosta, a non-CRCA racer, on top, so we’ll see how that goes for her! Hopefully neither of them will be as dumb as the author of this article, who rode off course in this race last year, but somehow got enough points to leave the 4’s behind.