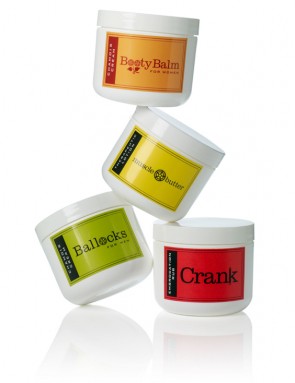 In the Fall of 2007 local bike racer and CRCA member Tracy Wargo got tired of buying chamois cream that just didn’t last on long training rides so she decided to make her own. After several months of researching ingredients and experimenting with various formulas Chomper Body was born.

Now her product line includes a recovery lotion, embrocation and two massage oils. It’s been a little over a year now since we saw her passing out samples at the CRCA races so we decided to check in and see how things were going.

How did the business of making chamois cream all start and how did you go about selling your products to the public?
Chomper Body really started as an experiment but it quickly developed into a business when people who tried it liked it. In the beginning I compiled a list of all natural core ingredients I wanted to experiment with. Wanting to be different from everything else in the category, I also eliminated water and a preservative. I then began mixing different combinations of ingredients and started testing. When I was satisfied with my formula I gave it to some friends to try and after positive feedback I decided to approach Sid’s Bikes on 19th street and gave them a sample. Shortly after they agreed to sell it in their store.

Do you make this stuff yourself?
Yes, I remember someone at one of the Bike shops asking me who my chemist was and I was like, um, me. At first I felt intimidated with that question but then again my stuff is so simple and natural that you really don’t need a chemist. It’s like cooking and baking, you learn how the ingredients interact with each other. And that is basically the philosophy behind my products. Simple and natural. When I began researching ingredients for my own formula I was shocked to discover that in some of the leading brands you are paying for water and thickeners. I like to use the Sarabeth’s analogy when describing my endeavor – Sarabeth started making jelly in her kitchen and now she sells her stuff to high-end retailers and has several restaurants.

How long did it take before you came up with a formula you thought was good enough to sell?
I started testing it sometime in the early Spring of 2008 and by July I was passing samples out at the CRCA races. Dan Schmalz from NY Velocity was also kind enough to review it for their web site. Shortly after Sid’s was onboard and willing to sell the stuff in their downtown store. That was huge. They really stood behind me and they are still my strongest supporters. I owe them a ton of thanks.

Have you changed anything about the formulas based on feedback from people who’ve used it?
Yes. Feedback has been really helpful. In the beginning I was obsessed with making the chamois cream as thick and hard as possible. But people thought it was a bit too hard so I began softening it up. Now I think I have it down. It’s smooth and thick like a paste and once it comes in contact with your skin it softens up so you can spread it. That’s what I’m hearing from my users. Also, the chamois creams are temperature sensitive so I don’t recommend leaving it in a hot car during a race. If you can, put it in a cooler. If it does soften just pop it in the refrigerator or it will harden up again on its own.

Do you find it hard to convert people from Assos or other brands?
Yes, but once they try my chamois cream they usually like it. It lasts longer and has quality ingredients and most importantly it is all natural. Of course, there are those who aren’t interested in switching and that’s fine.

What makes your chamois cream different from others?
Well for one it is butter and oil based so it is super thick and lasts longer. It also has no water so it doesn’t need a preservative. Right now there is no such thing as an all natural preservative so if you come across a brand that has water in it and it says its all natural that’s incorrect. I also use ingredients that heal and protect your skin. Emu oil is a great and unique ingredient. I would bathe in the stuff if I could but its super expensive. And lastly I have a men’s and women’s version of the chamois cream.

What is the difference between the men and women’s version?
The mens’ version is Ballocks and its basically the same recipe as the womens except for the essential oils. They have more masculine smelling oils like Tea Tree and Eucalyptus both of which are natural antiseptics and germicides. The women’s version smells like a field of French Lavender.

Seeing that you manufacture your own products do you need some sort of FDA approval or certification before you sell them?
Actually I don’t because none of my ingredients are listed as actives or drugs but all of my formulations and labels are registered with the FDA. It is very important to me that my products are of the highest quality because the people that are buying them are people I know. It is personal, there is a face behind the brand so I am super diligent about quality.

You started out making chamois cream but you also have other products for sale?
Yes, I make something called Muscle Butter which is for recovery and an embrocation called Crank. I also have two massage oils called Rest Day and Muscle Butter. The recovery lotion is a traditional lotion so it is water-based and cannot be called all natural but the Crank embrocation and the massage oils are all natural. There are a few other products I am working on that will launch in the fall. One is a facial cleanser that is really great for when you come home from a really long ride and your face looks 10 years older and I also have a lip balm and a hard lotion bar for chaffing in other areas of the body. This is not just for cyclists but for triathletes, runners and people who have chaffing issues.

How do you come up with ideas for new products?
When I come up with an idea for a new product I ask myself how mine can be better for my body. Also, because I race a bike I also want a product that is targeted to someone who lives that lifestyle. The facial cleanser, for instance, is based on the premise that oil dissolves oil so it is designed to dissolve grease and grime without stripping the skin of its own natural oils. This is great for athletes because your skin really takes a beating in the elements. It also doesn’t contain water and is preservative free and all natural. It is not rocket science just fundamentally simple and healthy stuff. I have a core group of ingredients that I like to work with also. The possibilities are endless!

How do you juggle your day job with your new company?
At first it was difficult because after I came home from work and got my training in I would have to start my other job but when I got laid off late last year I was able to focus more on the business. It’s easier in some ways but I have to be more prudent about how I spend money on the business. It has been a year since I started and sales keep increasing so I think I am here to stay.

How did you go about getting the word out about your products and what are your plans for the future?
My career as an art director has really helped me generate ideas and execute them on a shoestring budget. All the traditional methods of advertising like print and tv don’t really apply to my brand right now. I use new media like the Internet and social networking as well as ‘guerilla’ marketing to get the word out and to target a specific market. I also pass out lots of samples because people like to try something first before they make an investment into a new brand. Word of mouth is also good. I have people who like my stuff so much they post information on various cycling blogs about it. That has also generated sales outside the tri-state area. Now I have an ad on NY Velocity and have just signed up with Loopd.com which is basically Facebook for sports where you can sponsor athletes with your products. Stay tuned…

Where can you buy your products?
You can order from my web site at www.chomperbody.com and at these local shops: Sid’s Bikes in both East and Downtown locations, Strictly Bicycles just over the GWB, Piermont Bikes, Innovation Bikes, Champion Bikes, Al’s Cycle Solutions, Bicycle Habitat, SBR, TOGA on West End and in Rockland County and NYC Velo in the East Village.

For more information or free samples I can be contacted directly at mail[at]chomperbody.com.