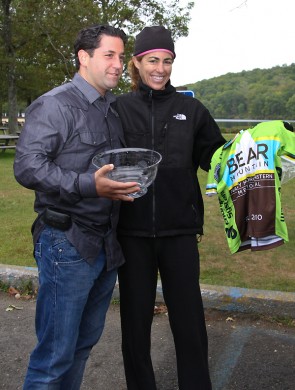 The women’s field was small but very strong. Kristen won the Tour of the Catskills while second place Amanda Watson, ,River City Women’s Cycling/Artemis won Tokeneke and took fifth at GMSR. Fabienne Gerard,CRCA/Fluoriclasse took third. Kristen was presented with a Tiffany bowl by Nancy Morgenstern’s brother Jacob.[photo by Gina Green] Kristen who is from Boston, avoided a long morning drive by camping out in the Park with her husband and kids.

In the men’s race, Jeffrey Ingraham,CRCA/Jonathan Adler, made an ealry move and stayed away for 2 1/2 laps. After he was caught, the pack stayed together until Jeff Buckles, Richmond Pro Cycling, and Jorge Perez,Mengoni, got away with a half lap to go. They just hung on to win by 11 seconds. Rafael Meran of Mengoni was third. Dan Zmolik,AXA, was the first CRCA rider in 5th. David Taylor,CRCA/Fluoriclasse, finished 9th after flatting. He said he did his hardest riding of the year to get back on. Chris Leong,CRCA/BH Garneau, was 10, Anthony Hall,CRCA/Jonathan Adler, 13th. Erik Post ,CRCA/BH Garneau,was the first Cat 3 at 14th. James Stevens, BH Garneau was 16th and Ingraham finished17th.