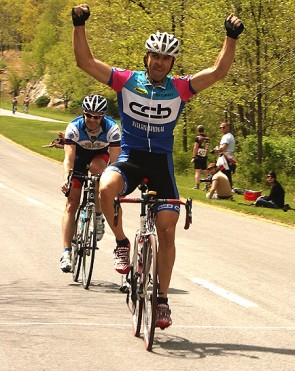 This report was written by the Masters 35+ winner Ciaran Mangan of CCB Volkswagen.

Great race. So I signed up for this race not expecting to win. I went to there to help my other teammate win.

Anyway, first time up the hill was hard, but I was not expecting a break because everyone was fresh and willing to chase. It was when we got down the other side and hit the roundabout that the racing started. No breaks seemed to stick but guys were dropping off the back like flies.

Second and third time up the hill was more of the same, guys just going to the front and drilling it. Just before the finish of the third lap a group of about six riders got away and had a gap of about thirty seconds. This, I thought, was the move — and I was not in it.

We started the climb for the last time and I knew it was going to be hell for leather so I placed myself in the top ten riders and hung on for dear life. Just before the top David Taylor attacked and about five of us got to the lead group only to be caught by the main field again.

Now we head down the descent and through the roundabout. The attacks were coming from everywhere. I went with as many as I could. Finally David Taylor attacked and I bridged across to him followed by Edward Angeli.

We rode up and over and made the final turn around with about a 15-second gap on the field. So at this point I am thinking, Will we make it or not? David seemed to be the strongest of the three of us. We got over two hills and started heading up through the feed zone.

With 1k to go I was on the front and David attacked, hard. I thought to myself, do I chase or do I leave it to up to the other guy? I decided to chase, dropping the other guy and seeing stars as I chased David. I latched onto him with about 500 meters to go, rested for 200 meters and jumped him to win the sprint. I could not believe I had just won the Bear Mountain Road Race.