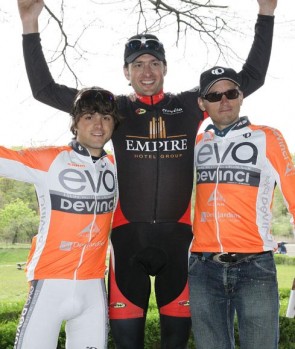 Race report written by the winner of the Pro/1/2 race, Matthew Johnson of the CRCA/Empire Cycling Team.

How the race unfolded for me: Earlier in the race having burned too many matches covering attacks up the climb I spent the middle part of the race suffering at the back and thinking that my race was over.

Eventually I started to feel my legs again, so with two laps to go in a dwindling field I put my head back in the game and realized that there was a break of up the road. The pace up the climb with two to go was pretty fast, enough to bring the break back within view. Close to the top I thought we were going to get them, I think a couple of guys actually bridged the gap, but for the rest of the field we got left behind with the race up the road. I spent most of the next lap in what felt like futile attempts to bring the break back.

There were only a few of us that were pulling, the rest either had teammates up the road or were too spent to do anything. I couple of times I went clear, but I knew with the strong winds that it would be a mistake to solo to the break. I might get there, but probably wouldn’t have anything left.

Eventually I went up the road with Jonathan Erdelyi (Rite Aid) and a guy from Ottawa bike club. We then bridged the gap over the last third of that lap, catching them on the descent. I immediately went on the attack, but it was short-lived.

At the base of the climb Dan Cassidy (CCB) snuck away. I surprised myself pulling away from the group on the climb and it was then, on my own that I noticed the CCB jersey up the road. I settled in and rode the climb well within my limits.

Near the top I was joined by the two guys from Eva-Devinci, along with Eneas Freyre and Roger Aspholm. They had attacked the rest of the group and went clear. So the five of us then worked together to the finish. We could see Dan Cassidy up the road and slowly brought him back. So nearing within a couple of kilometers to the finish one of the Eva-Devinci riders went on the attack, and we all chased him back.

We came back together in a paceline again and as we came around the final curve to the finish I was at the back. The pace was stagnant at that point, and then eventually everybody started gunning for the line. I just sat back, clicked it into the 53×11 got up to speed and then waited. I just kept telling myself “wait, wait, wait.” Then when I knew the time was right I broke out fast on the left and came powering by everybody just before the line.

It was an exciting and emotional moment to cross the line first after those long 98 miles. I think it is also the first time I’ve won a race with a sprint since my first race ever at age 14, when I won a two up sprint.