After this past weekend’s stellar results from many of our racers, we asked for a race report from Cecilia Davis-Hayes of CRCA/Stan’s No Tubes p/b enduranceWerx. See below for the story of how she procured her big bottle of chocolate milk: 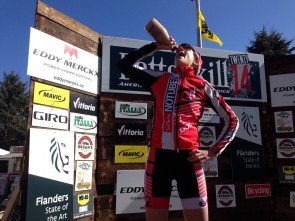 My first Battenkill experience was a total thrill ride. I’d heard rumors of the sketchy dirt sections, gorgeous views of Meetinghouse Road, the covered bridges, and the tough competition, but I certainly had to see it to believe it. It’s like nothing else!
The women’s Pro/1/2 race started out tamely enough as we cruised along smooth paved roads and I admired the scenery- rolling hay fields and cows, with the occasional snow path hanging on for dear life. Then at mile 6, we hit the first dirt section and polite ladies turned in to swarming hornets as we all chased for the front, dodging pot holes, mushy sections and fallen riders who had not been able to avoid them. From here on out there was rarely a dull moment between dirt sections, punchy climbs and attacks. Some awesome efforts by my teammate BrittLee Bowman, who ended up winning the field sprint to take 4th. On some of the dirt sections the only rideable portions were the two parallel tire tracks, so we were forced into double file, praying that the girl 6 inches in front of your wheel didn’t make any sudden movements.
The real action started after the second feed zone at about mile 42 when we hit the steepest climb of the day, Herrington Hill, followed by a brief plateau and a few more punch climbs. my plan was the stick to a Colvita rider’s wheel since she was the strongest climber in the bunch, who sure enough, lead us into the climb. After a few minutes I looked back and only two of us had been able to stick it and we had quite a gap. Though pulling through was about the last thing I felt able to do, I gave a brief pull (still on rutty dirt) to show I was committed to the break. The third rider (Giles, from the military team) did likewise.
Screaming fans, including our hosts in Cambridge, owners of the Rice Mansion, and my dad and sister greeted us on the picturesque slopes of Meetinghouse road. The descent and flats that followed were the worst dirt sections of the course. I got caught a few times in deep sand and nearly tipped over but was more than pleased to be riding Stan’s NoTubes wheels and Hutchinson Intensive tubeless tires to give me the extra confidence to make it through. We got a moto report that we only had 25 seconds on the field so we kept pushing. At one point on a long downhill section I must have been taking turns with a vengeance because I gapped them by 100m. I was loving the thrill ride. Totally in my element. I decided to wait up because we still had 10miles to go but I do wonder if making a solo break attempt to the end could have worked…but I suspect the two of them would have been stronger.

With 1k to go I pull off the front and take third wheel behind Giles, the bigger stronger girl of the two and Colvita leads in the final 90 degree turn leading into the 200m straightaway. Out of the turn, Giles (with me sucking her wheel) blows by Colvita as we’re racing to the line. I knew I had to come around her if I wanted the win, but the question was when? 120m to go? 100m? I had no idea. Clearly I waited too long because when I finally did I gained on her steadily to the line but didn’t have enough time to overtake. I came in 2nd by a wheel length. Very pleased with the result though!