A Few Tough Out the New Year’s Ride 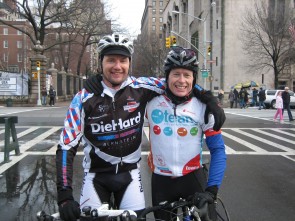 The New Year’s Century Ride is probably the oldest CRCA tradition, going back to the first years of the club in the late 1890’s. They didn’t do the same route, there was no George Washington Bridge, but they did a century either on New Year’s Day or New Year’s Eve.

The weather wasn’t so bad this morning. The problem was the snow and sleet left from last night. As I rode in the park up to Engineer’s Gate at 7:30, I didn’t see a soul on a bike. At the 90th St. entrance, I was very happy to see six riders waiting. In addition to George and Tim, Todd Brilliant, Brian Gatens, James Mernin and Sorin Ciurea. Amazingly all brought signed waivers. After giving out the index cards to get signed at the Bear Mountain Inn, we took off for two laps around the park. 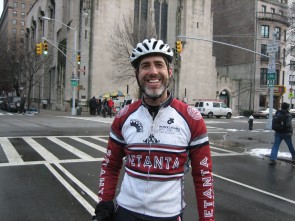 We started slow as there were areas of snow, slush and some ice on the road, especially by the downhill by 106 st. George as always was great company, telling me about his upcoming trip to California to ride down the coast with Craig “Smilie” Upton and how he finished first in the 1999 ride. I even learned that Roger Aspholm started racing with the CRCA/Think Racing team. Besides Roger, the team had Smilie,Todd Herriott who went on to ride pro, a skinny Dave Jordan, George and Leon Moser who won almost all of the club races for 2 years.

With the weather in the mid 30’s and the sun starting to come out the road was clearer on our second lap. To my amazement Sorin was doing one-legged drills up Harlem Hill. Interesting warm up for a haul up to Bear. As the pace started picking up, I bid everyone good luck as we passed W 72nd St for the second time. 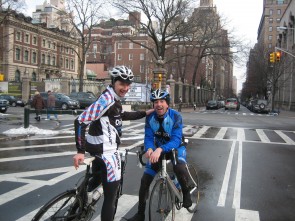 After getting over the bridge, the riders encountered fog and colder weather. The road was clear but most of the shoulder was some form of slush. With very light traffic, this wasn’t much of a problem.

It turned out that the Bear Mountain Inn was closed, but a parking attendant was around to sign the cards. Jim and Sorin dropped out because of equipment problems and got a ride back with Jim’s wife who planned on meeting up at Bear.

As they headed back home, Todd Brilliant started pulling away. At one point he might have had several miles on the others. George,Tim and Brian started working together. Brian was dropped on the Rockland climb and Todd was caught shortly after. Without having eaten and drinking only 1 bottle, Todd was suffering. George said Tim was really hammering up the hills. They took the State Line Hill very quickly. “Tim looks like a real contender to win many Cat 4 races. He’s very good,” said an impressed Suter.

I headed back to the park at 12:30 and met up with Jim Boyd. No riders were in sight. Not many people were riding in the park. Many were walking all over the road. David Filosa stopped by, very happy with his new Cannondale CAAD9 Rival bike. Ken Harris stopped by to talk about the exciting 2010 Junior team. Jimmy Andrello stopped by as I was getting ready to leave. Then George and Tim showed up. After congratulations, photos and stories, Tim took off. Todd then showed up, much earlier than we had anticipated. He was tired, but very happy to have done the ride as was everyone else. Brian pulled in a few minutes later.

George, who joined the club in 1997 was very happy with meeting some of the newer members. He commented that the depth and constant revitalization of the club is what makes CRCA so great.