CRCA and the New York Cycling community is coming together to support the development of a state of the art velodrome complex at the Kingsbridge Armory.

The Kingsbridge Armory opened in 1917 as the home of the 8th Regiment Army. At the time it had the largest open span ceiling in the world. It is still the world’s largest armory. The drill floor is 180,000 square feet, larger than a city block. A 250 meter track and surrounding arena can fit easily along with a BMX Skate Park and other facilities.

The armory, which is in the Bronx, not far from Yankee Stadium, is a great location for the velodrome. It is easily accessible by public transportation. The #4 train stops at the front entrance and a D train station is 2 blocks away. 15 bus routes from the Bronx stop at the armory. The building is also in a network of bike paths connecting the Bronx with Manhattan and Westchester and just a few blocks from the Major Deegan Expressway.

The New York Cycling community has long been searching for a home for a state of the art indoor facility. Kingsbridge might be the only existing building in the city that can accommodate one. Finding space for a new building with good access to public transportation is a difficult challenge in the city. The very successfull New Balance Track and Field Armory in Washington Heights, where the Millrose Games will be held in February, sets a good precedent for successful development of city armories.

The building of the velodrome will enable the development of programs to attract kids into the sport. The English program at Manchester which has produced world champions on the track and the road ,including Sir Chris Hoy and Mark Cavendish, is the model. While Manchester benefits from the state lottery, Kingsbridge will privately finance its programs.

In the past New York produced many stars on the track. In 1960, Herb Francis was the first African-American on a U.S Olympic cycling team on which he was joined by NCA CEO Jack Simes. 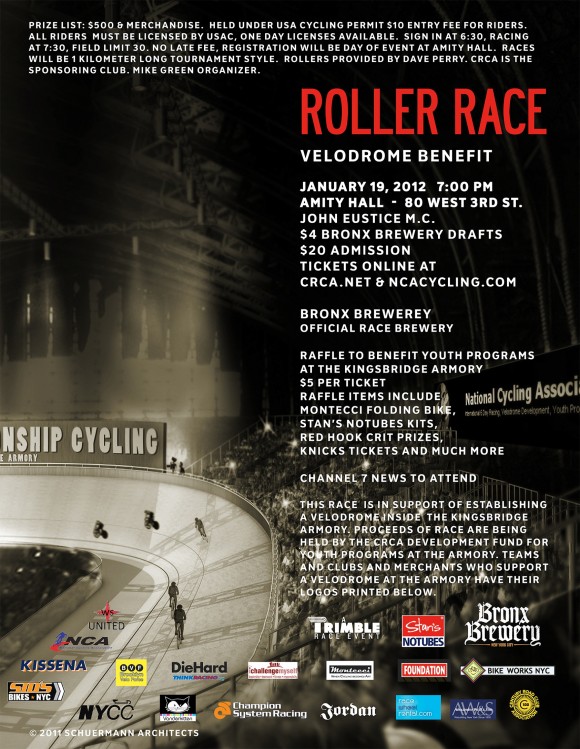