We recently caught up with CRCA member and (relatively) new racer, Natalie Tapias of the CityMD Women’s Racing Team. She had some amazing results at the San Dimas Stage Race a few weeks ago. We wanted to know more about the race and what it was like racing against jerks… ahem, fellow racers, who had been riding all winter under the SoCal sun while we were languishing among piles of snow and ice. Natalie’s report is reprinted below. 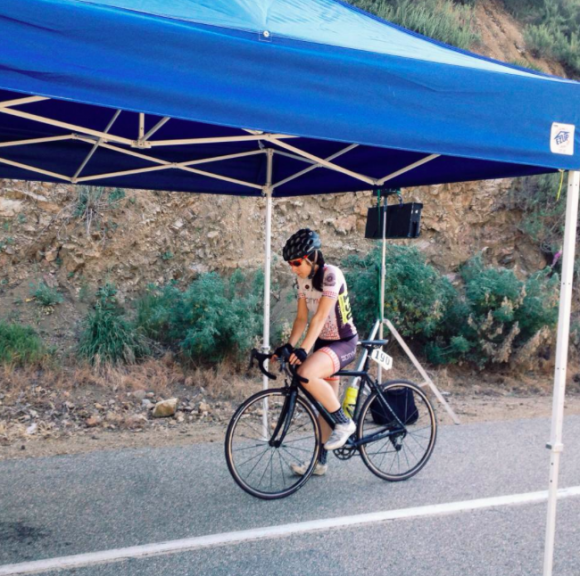 This past winter was a long one in NYC but I wouldn’t have known. This was my first winter training and looking forward to a full season of racing my bike, so I had plenty of enthusiasm for time on the trainer in front of the TV, listening to good music, and getting out in the snow on my cross bike. Once March rolled around, I was ready to begin racing, but regional races kept on getting postponed.

It was on one of these Friday nights, when snow was falling yet again, facing another race cancellation notice after I was already geared up to race the next morning in Central Park, that I decided, “enough is enough!” and impulsively registered for the San Dimas Stage Race. I bought my plane ticket, borrowed a bike bag, and called my brother and his little family, who graciously agreed to host me. Two weeks later, I was unpacking my bike in SoCal.

I learned of the SDSR while reading up on domestic pro women’s teams. When I realized the race promoters offered a separately scored Women’s 3/4 field, I thought, “hey, I can go race that course and see pro racing in person!” Plus, my brother and the company of my cute niece and nephew would make the trip worth it no matter my results. I was looking forward to getting my bearings in racing again, eating some avocados, catching up with my sister-in-law, and getting some tan lines.

None of my riding buddies or teammates were available for the trip so I’d be flying solo, and it was daunting. For out-of-town races, you never really know the caliber of your competition, whose wheel to follow, or how you’ll perform in a new environment. Plus, traveling with your bike has its own host of stressors. At a local bike shop, where I was getting a headset re-assembly issue sorted, some of the shop guys made me question my confidence going into the race. They asked all the wrong questions that I hadn’t really yet considered: “Do you even know how hard this race is?” “Do you even ride your bike outdoors in NYC this time of year?” “Are the streets still filled with snow?” And a very grave, “You know, this is a very, very, difficult race – have you seen Glendora Mountain Road?”

Stage 1 was a 4.25mi hill climb TT on Glendora Mountain Road. It climbs, serpentine, up a desert foothill full of trees, replete with rattlesnakes and photographers staged at every corner. My brother had strapped my bike to the back of his jeep and drove me to the start line as I babbled nervously about how I’d be pleased just to finish today’s stage – the whole race even – and I’ll just focus on getting a tan. My brother would have none of it. “Go out there and give them hell,” he said. I pushed it really hard at the beginning and then settled in to a steady suffer pace. I passed the woman who started 30 seconds in front of me and then another. At one point, I passed a recreational cyclist who told me, “there’s someone else around the bend up you can pass!” I climb climb climb, take water, and in the final stretch I gave it all I had. I met a few other racers at the top of the climb around the water jug and admired the view of the valley on the other side of the ridge. People were surprised to hear that I’d traveled from Brooklyn to compete in a W4 field at a stage race in San Dimas. It wasn’t until my brother and I stopped at a gas station and I checked my e-mail that I found out I somehow climbed Glendora Mountain Road the fastest among the Cat 4 women. I’d wear yellow the next day! 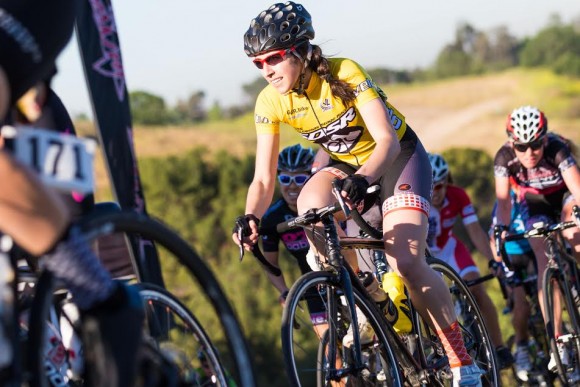 The next day I woke up super early (still on New York time) and made my steel-cut oats and coffee. I drove myself to the race without enough time to inspect the course, grabbed the yellow jersey, and haphazardly asked a fellow racer to please take a photo of me in yellow before the race because, hey, I might lose this today! My strategy going in to the race was to cover any substantial breaks if they occurred, and to go for intermediate sprint points. 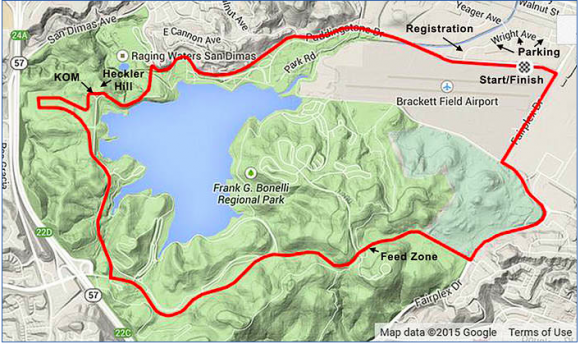 The scenery was beautiful but I suffered. This was my first road race of the season and I definitely felt it. While the race started out pretty uneventful, the climbs were tough and the descents more technical than I’d ever experienced in the NYC area. No one seemed to pay attention to the yellow line rule. There were obstacles on the course and hay bales placed in front of them. I hit a pothole and worried about flatting given I didn’t have an extra set of wheels and there was no neutral support. Through some stroke of luck, I got through the race without any mechanicals and never lost contact with the front group (except for one moment when I dawdled on the final downhill into the finishing straight and another racer yelled, “Come on! Let’s go! You can’t drop now!’). It was a drag race to the finish line just after the descent. I had no idea which wheel to follow or how to position myself, so I end up 8th in the field sprint with same time as the leader. But, that allowed me to hold onto my yellow jersey for the 3rd and final stage. 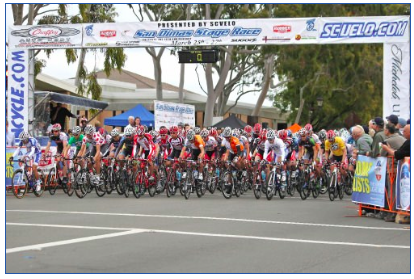 My CityMD teammates sent me endless advice and encouragement going into the third day, and word spread among my fellow CRCA racers. I saw that a lot of people back home were rooting for me, and that got me excited to start stage 3: a crit in downtown San Dimas. I had a 2-second lead in the General Classification on the 2nd placed woman, so I knew that the intermediate sprints and finishing time bonuses would be important. I worried about going too hard the beginning and blowing up, getting dropped. It didn’t happen. I never lost contact with the lead women and was glad with my 3rd place sprint finish. I held on to my overall lead!

While it’s challenging to fly solo at any race, let alone a stage race, I’m passionate about this sport and about women’s development in the sport. I was glad to see that the San Dimas Stage Race organizers listened to recommendations from local racers that there was interest in a W3 or W4 field, and offered it. I believe strongly that our attendance speaks loudly to organizers, our sponsors, and our friends. For me, showing up to the San Dimas Stage Race solo was an important way to support more racing opportunities for development women. 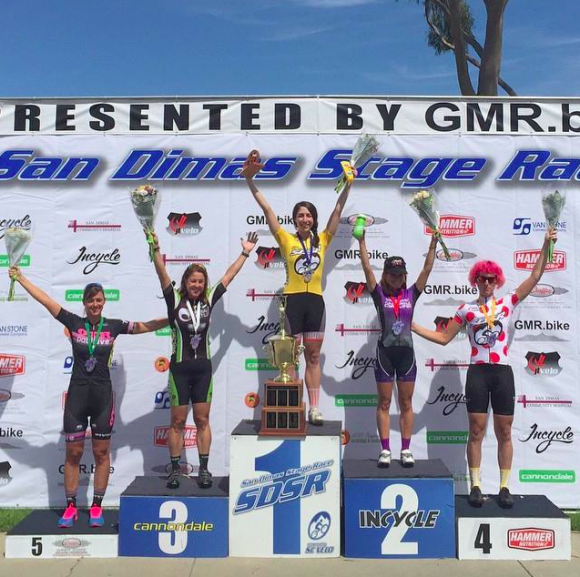 Racing out-of-town, you don’t know who your competitors are, how they race. Without teammates, you don’t have someone who knows what you look like when you’re about to dropping off the back, who will tell you exactly what you need to hear to snap out of  it and hold on for a little while longer. You don’t know how the peloton moves or how the road curves. You don’t have friends there racing with you and making sure that everyone is on time, numbers pinned, fed, dressed, and bike ready at the start line. You do all of this yourself and you represent your sponsors who make it all possible. Despite the challenges, I still think you should absolutely do it. You will never regret the opportunity to travel with your bike and for your sport. It will introduce you to people you wouldn’t have otherwise met. Finally, as a woman, showing up and racing is so crucial in delivering the message to the organizers, community partners, and sponsors that we, as women racers, deserve our own fields, and that their efforts to provide us the opportunity to race do not go unnoticed. I had an extraordinary time, and I hope some of you will go with me next year. I know I’ll be back.

Thanks, Natalie, for the great report! We wish you good luck for the rest of your season!