In March 2011 I participated in my first bike race, a CRCA club race. Prior to that I was a runner and then a triathlete, but decided to put both aside after an on and off, two year battle with plantar fasciitis. 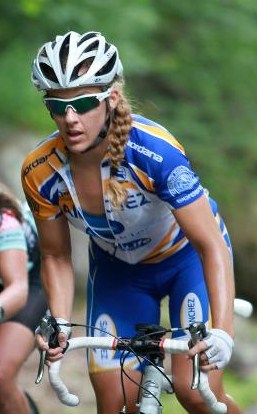 My riding buddies always told me to “stop that running crap” and pick up bike racing, but it wasn’t until two years later when I decided to listen.

Several months and many bike races later, I had worked my way up to a Cat 2 rider. Sure, it was quick upgrade, and some even told me to hold off, but I wanted and welcomed the challenge for the 2012 racing season. The off-season months in Colorado flew by and here I am, back in New York City and extremely excited for another season of East Coast racing.

The best part about being a member of the CRCA is that they put a lot of time and effort into supporting their riders not only in club races, but at out of town races as well. When I heard about the Rider Stipend Program I thought it was a great way to give back to those who have achieved quite a bit of success as a rider and want to further develop their skills at larger, out of town races, but may need financial assistance to do so.

I competed in the Tour of the Dragons Stage Race, May 5th-6th in Bennington, VT. It was my first stage race as a Cat 2 in a Pro/1/2 field. I followed the registration a week leading up to the race and knew after registration had closed that I would have my work cut out for me. The field was stacked with strong, experienced riders. A plus was that the bike handling skills were going to be exceptional!

I learned so much about myself this past weekend, as a rider and as a person. The most important lesson I learned was to not stress over things or situations that are completely out of my control. Example #1: When I lined up for my TT I looked around and realized I should have brought my TT bike, or clip-on aero bars at the very least, since almost everyone else had either or. I thought since it was a very technical course with several, punchy hills that my road bike would be sufficient, especially since I used it the year before as a Cat 4. I was wrong, but there was absolutely nothing I could do in that moment to change things. My TT suffered greatly, but that was that! 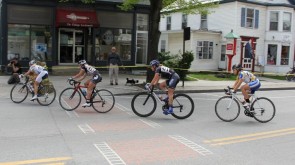 Raquel Miller at the Dragons Crit

Example #2: I arrived at the crit course thinking I still had 40+ minutes to spare for warm-up only to find out that I was sadly mistaken. The race was about to start and for some reason I had the times all wrong. Thank goodness I decided to head out at the same time as my traveling buddies who were on their way to their ITT. I would have missed my race if it weren’t for them! I didn’t stress though. I laughed at myself, took a deep breath and said “This is the situation I am in, now deal with it.”

I drove away from this weekend, without a doubt, a much better rider. Having the opportunity to participate in a big stage race with such a high caliber of women is invaluable. I ended up 14th in the GC, which was mid-pack and not far off from some of the women in front of me. The goal was top 10, but not everything went as planned, which is totally ok with me. As an athlete I am going to have my great races, ok races and bad races and from each I will take away at least one important lesson.

I want to thank the CRCA for approving me for the Rider Stipend Program as I wouldn’t have been able to make the trip if it weren’t for their assistance. I think it’s extremely important for the growth and development of women’s cycling, for other CRCA women who qualify for this program, to take advantage. Our club is providing us with this amazing opportunity to show others that our sport has so much room for growth and that we can put on exciting races!

Thank you to all of the other CRCA women who were 100% supportive the entire weekend and congrats to all of those who raced.

May 8, 2012
Orchard Beach ResultsDiscount for Club Members to watch Giro on Universal
Sponsors