Starting at 7am is definitely a luxury. So civilized.  And with no rain and temperatures in the upper 40s, riders were greeted with a very pleasant race day.

The races started right on time and in the women’s field it seems the Innervation Fitness p/b Stan’s NoTube team had arrived not only with their new team kits and and Stan’s wheels, but also a plan to get aggressive.  On the first lap a break of four formed consisting of Beth Renner and Anneliese Haines from Innervation along with Dara Kiese (Radical Media) and new member Emily Spence (BH/Comedy Central).  Houlihan-Lokey was the only team with numbers that had missed the break.  But without assistance from other riders, they were unable to reel in the breakaway 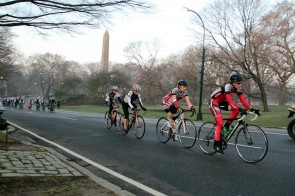 the winning break pulling away after the first lap

group in who looked smooth and consistent. Each lap they rolled through as their lead increased, getting close to 2 minutes with one lap to go.  With two riders in the break, Innervation had the edge and in the final sprint, Beth Renner was able to pull slightly away from Dara Kiese.  Emily Spence is certainly a rider to watch going forward with an impressive debut race for third.  Anneliese Haines finished fourth.  In the field sprint, Innervation finished off a nice day out with Becca Schepps outsprinting Kristin Lotito and Carol-Lynn Mills (both of Houlihan-Lokey/Sanchez) who no doubt spent much of the race trying to get the peleton up the road towards the breakaway.

The remaining fields basically stuck together and ended in field sprints.  At the finish line each time at least both the A field and the B field were pretty much together.

The B field got the hint after the last race, and upped the pace today. They stayed ahead of the Men’s clinic with a couple of sub 14 minute laps…. The sprint should have been won by Jesse Walker (Setanta) who forgot to throw his bike on the line.  Instead, the photo finish showed Josh Sakofsky (Siggi’s/NYVelocity) had innched him out with his text-book perfect bike throw on the line.  Corey Morenz (Sixcycle-RK&O) finished third.

The C field clinic provided a great opportunity for new racers to get a feel for racing.  In field coaches and experienced riders helped keep things safe and shared tips during the race to help riders think about tactics as things evolved.  Results for that race are still being tabulated, but congratulations to all riders.   Thank you to Scott Willingham for organizing the event and to the Kissena and Champion System p/n Stan’s NoTubes teams for helping out during the race.