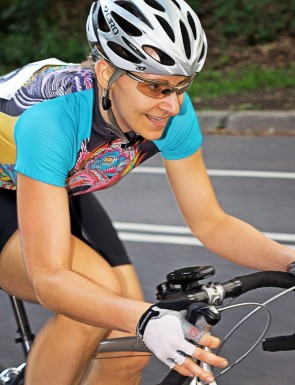 Approximately 30 neo-racers showed up bright and early on this beautiful June morning, along with the hosts Radical Media and several other experienced women from CRCA. Nina Strika gave a brief but informative talk about safety on the road and race tactics, after which everyone toed the line, waiting for the last men’s field to pass through so the race could begin.

The race began with a neutral start to the top of Harlem Hill. But as soon as the field hit the top of the hill, it was definitely “game on!” These neo-riders were ready to rumble!

The field set a brisk pace for the first full lap of racing, with an even stiffer pace set up and over the top of Harlem Hill, putting pressure on the peleton. A small group of riders got an advantage and tried to increase their lead on the west-side rollers, stringing out the field, but most of the group came back together again by Tavern and set up for an intermediate sprint prime at the Met. Emily Underwood of Gotham Toga went early up Cat’s Paw and got a gap on the field, taking first place in the prime, with Lexie Pitney hanging tough to take second.

The third time up Harlem Hill proved as challenging as the 2nd, but racers dug deep to close any gaps that formed and, despite some late attacks, it looked like it was going to come down to a field sprint. The sprint itself was a nail-biter, with riders who took an early lead on the drawn-out met finish run being overtaken by others, only to rally and get back in the race. In the end it was a drag race to a tight one-two finish between Emily Underwood and Lisa Mazzola of Chomper Body, with Julie Riccardi taking the final spot on the podium. 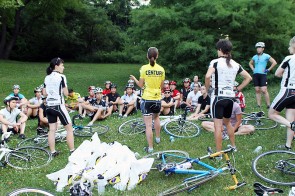 After the race, the new racers sampled the spoils of their “goody bags,” including Clif andproducts and Peanut Butter & Co packets, and collected their prizes while Nina and the Radical Media squad recapped the race and answered questions. All-in another very successful clinic. Thanks again to everyone for their effort and participation, to CRCA for facilitating the event, and to Marco Quezeda for proving once again that a picture is worth a thousand words. 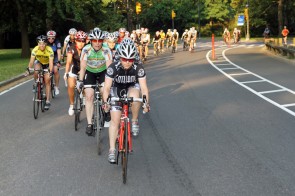