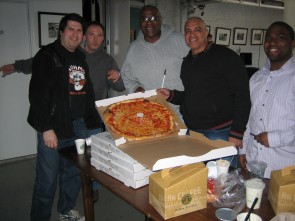 We took a break for Joe's Pizza. Hmmm.

An overflow crowd of 20 new officials attended the USCF clinic on Saturday. Dave and Judy Miller conducted sessions on Saturday for new officials. The Saturday session covered USACycling rules for road,time trials, criteriums, track and mountain biking. After the presentation, the attendees took a certification test. 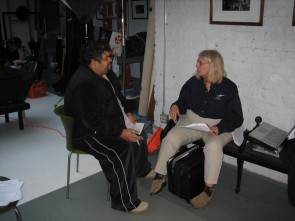 Judy Miller went over the test results with each new official.

Dave’s presentation covered the different roles of motos in a race caravan for a major race. Actual race videos were used to illustrate points. Dave explained that what motos do in a park race is not all that different than riding in the Tour of California.

To neutralize fields, Dave explained that motos use a red paddle. In the US they mainly use ping-pong paddles with a whole cut to let the wind through. But in France they use giant oversize paddles. Besides being used to signal the field, Dave said they are used in the Tour de France to swat away over aggressive spectators.

The turnout was a record for a clinic in New York City. Much credit goes to Stephen Chang, who got the word out to the CRCA motos. Thanks also to Rob Stern for providing the space.

The training should help in both CRCA club races and in local and regional open races. Moto officials have the best view of an entire race. They can help with both keeping the race safe and with making sure that the competition is fair.

Dave Miller emphasized that the primary focus is safety. He gave many pointers on how to keep a race competitive while ensuring safety to both spectators and racers.

The new officials left the Sunday session with renewed enthusiasm for the sport even after sitting through 6 hours on Saturday and another 4 on Sunday.

Hopefully the added moto officials will help avoid situations , as in last years Mengoni race, where decisions were made by consulting riders.