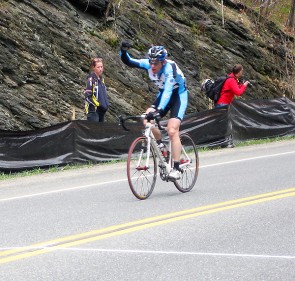 CRCA riders led by the victories of Paul Carbonara in the 45+ and Evie Stevens in the women’s race at Jiminy Peak and Kevin Brubaker in the 3’s and Fabienne Gerard in the Women’s 4’s at Colt’s Neck continue an excellent campaign in the “Spring Classics.”

Evie continued her streak after winning Battenkill and GC at Ephrata in the previous two weeks.

Dan Zmolik put in a solid ride in his tuneup for the Joe Martin Stage Race with third place in the Pro/1/2 race.

Fabienne Gerard put in another excellent ride, finishing 7th overall but first Cat 4. All of the women ahead of her were Cat 1 veterans of NRC races.

On Sunday she fought off Gabrielle Fisher to win the 4’s at Colt’s Neck. In the driving rain Kevin Brubaker broke away to win the Cat 3 race.

Colin Prensky got 4th and Scott Wisenbacker 6th in the Cat 3 race.

Prepping for Blondie’s summer tour, Paul podiumed for the umpteenth time with an impressive victory. Here’s his account.

“A decent break went up the road on the 1st lap with Keltic, Arc En Ciel and Bethel riders. There was still a lot of horsepower in the field so the break stayed at only about 45 seconds. On the last lap I was keeping an eye on John Funk and Dzmitry Buben, two really great masters and guys I thought would try to cross the gap. When Buben went, I jumped. Randy Rusk (Arc En Cel) sat on while Buben and I worked hard to get across. We caught the break and made it to the finishing climb. When Rusk attacked, I went with him. The rest of the break threw in the towel. With about 300 meters to go I just went for it and was so happy to win.”