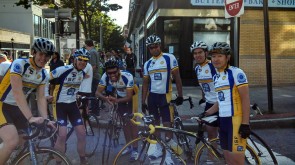 The ISF Global team is an example of how it takes less than you think to start a CRCA subteam. Team founder, Todd Potter was a “team of one” in his first year of racing, 2011. Partly thanks to a 2012 article about “Teams for new racers” on the CRCA website, the team grew a bit the next year. Now, in 2013, the team features 12 racers; a diverse group of Cat 4 and 5 teammates.

Todd himself was just a cat. 5 racer when he started the team, and he had no huge name sponsor. ISF Global is a specialty fabrics business run down in Southern Pines, North Carolina by his brother in law, Mark Ix. Mark used to race in the CRCA for the Nautica subteam and had originally encouraged Todd to join the CRCA. When Todd began thinking about starting a CRCA subteam after a year of racing alone, Mark was happy to have his company name on the kit of Todd’s “team of one.” 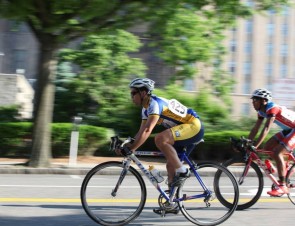 Within a couple of years, Todd now finds himself on a team of twelve. Todd says, “In our first full year we have had some nice placings at various local races and will be riding in support of the current yellow jersey leader at the Lucarelli and Castaldi Cup Race series in Prospect Park.” But the team is not just about winning. As Todd puts it, “For someone just getting started CRCA is a great club to get introduced to the bike racing culture, but the club has over 300 members and one can still feel “alone” in this huge club. That is why ISF-Indigo got started.” The ISF Global team provides moral support for training and racing, has a Facebook page for communicating about race news, and generally tries to help each member reach their own goals for their racing. 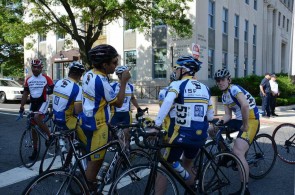 Rather than just recruiting people who have already racked up huge results in racing, ISF Global looks for “like minded people to share the experience of growing our skills together while having fun.”  Team members just need to join CRCA, have a valid license, and purchase a team kit. Racers interested in the team should contact Todd Potter at this link isfglobaltextiles[at]gmail.com or just talk with a current member at a race (look for the distinctive white and gold kits). In particular, the team is interested in adding more women to its roster and supporting women’s racing in the CRCA.