Late Addendum. On May 20, 2012, David Anthony tested positive for EPO use at the New York Gran Fondo (see this link). This puts the following article in a very different perspective. D. Carr.

Tell us some about when and how you got into bike racing.

Towards the end of the summer of 2008 I was going through some personal problems and I was open to trying something physically challenging when I bumped into the NY Velocity guys – Alex Ostroy, Matt Richards and Francisco Liuzzi. My fitness wasn’t so great, but I always liked riding, so I thought I’d try to amp it up a bit and give racing a shot. Being a little older getting into the sport and not being in the best shape, I had pretty low expectations, but figured it might be a good way to blow off some steam. I joined their team, and they really helped get me going. There were some other Cat 5s just getting into racing as well, so we had a lot in common and quickly formed a tight knit little group – which was great – it didn’t feel as intimidating. We helped each other make sense of all those little things that go into the sport, and also the inevitable setbacks. I think that gave me an appreciation for the team aspect of the sport, which I really like. We all trained together over that first winter of 08-09 and then in the spring of 2009 Battenkill was my first out of town race after doing a few early spring CRCA C races with the club. 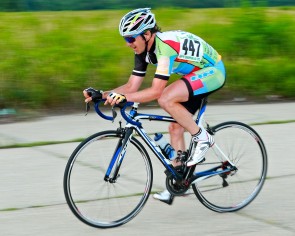 When did you get past the “fitness not so great” feeling and start to feel competitive in your field? And what do you think made the biggest difference in getting you there?

Getting the fitness up has been a gradual and linear process throughout. It has also included learning how to eat cleaner and also bringing my weight down by almost 15 pounds. It seems you do a bunch of training and get to a plateau where you are competitive in your field, only to find that when you cat up it’s almost like starting over. There is another notch or two up that you need to get to in order to be competitive at that next level. That is one of the things that is cool about racing – with the category system it is set up so anyone, at almost any level of fitness can participate. But there is always another level to strive for if you want it.

Over that first winter the whole concept of training was new. I didn’t have much racing experience, so I figured I’d work hard and try to learn what worked and to increase my fitness. I found myself trying out a lot of things for the first time. NY Velocity provided coaching by Cisco Liuzzi and then Matt Richards so I got introduced to the idea of structured training, intervals, etc. They do lactate threshold and body fat testing as well (both of which were not that encouraging at first I might add). I also picked up Joe Friel’s book, The Cyclist’s Training Bible. There is a chapter on planning your training year, which introduced the theory behind periodization. It seemed to make a lot of sense. I’d always just gone out and ridden my bike, so the idea of doing different things during different periods in the year was a new concept. He also introduced the concept that a category rider needed a specific minimum amount of hours of training per year, and he laid out those ranges for cats 5 through Pro. I figured if I wanted to be competitive in a given category, that I should train the amount of hours of the category above me. I’ve been able to stick to that up through cat 3. However, the next level up is a big jump. Now that I am a 3, I have been trying to train like a cat 2, but we will have to see if it’s possible to keep up the volume, which is quite a bit higher than cat 3. 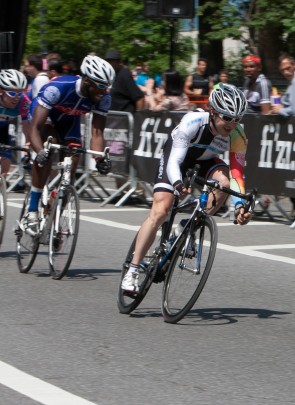 One other thing that made a big difference is we had access to the Computrainer gym at a bike shop that used to be in Tribeca called Cadence. The Computrainer is an indoor trainer and it creates resistance throughout the full pedal stroke.  You set it to a specific resistance and no matter how you vary your cadence or pressure on the pedals it varies the resistance to give you a fixed wattage. This may sound simple, but most indoor trainers don’t do that. The effect is like you are riding up a steady hill, or into the wind.  After a few weeks on it, I noticed some nice gains in fitness and decided to incorporate it going forward.  Cadence unfortunately closed. These trainers are pricey, but I found one on Craigslist and have used it every winter since.

Of course the final aspect to fitness is racing. I’ve increased the amount of racing each year, and there is just no substitute. This year I also incorporated racing at Floyd Bennett Field a lot more. There is just nothing like it. It’s kind of the perfect workout. An hour easy to get there. An hour flat out. Then another hour easy home.

So, you had the conditioning, I’m interested in what it took to move from moving from success in TT’s (which is almost pure conditioning) to some solo wins, most recently the Capital Region win where you solo’d the 3-4 field for most of the race [also some others, am I correct?] Is such an effort like a long TT? How do you meter your effort in uneven courses like Bear or Capital Region to be able to stay ahead of an entire field by yourself?

Since the fast twitch fairy never visited me that left breakaways. The first time I got in a move in a CRCA B race I killed myself for a lap and half, only to get ejected out the back the last time up Harlem Hill. The other 3 guys went on to win. The first of many painful lessons in pacing.

I accept that some people feel that training with power in the lower categories is overkill, but using it helped a lot in figuring out how to pace myself. It was clear when I checked my file after that break attempt how badly I overcooked my efforts. Until I looked at the file I just assumed I got dropped because I sucked and wasn’t strong enough to keep up in the break – the reality was I needed a lot of work on evening out my efforts. These days I don’t look at power too much while racing, except in a TT, or sometimes in a break, and then just to make sure I’m not overcooking it. I still have a lot to learn about racing, but at least now if I go off the front I usually don’t blow myself up anymore.

Yes, you are correct. Pretty much all my road race results have been from jumping solo, including both times at Battenkill and also Bear Mountain last fall, and recently Capital Regions. Breaks are risky – and I’ve also been reeled in and dropped a fair number of times. But if you are not a sprinter, what else you got? 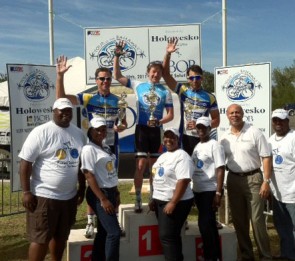 To answer your question about Cap Regions, I was in a move with a very strong racer from another team for about the first 40 miles, and then by myself for the last 18 miles or so. When I first went, I wasn’t’ thinking to try to stick it the whole way at all, but then he and I ended up working really well together and it played out that way. I also had two strong CRCA BH/Garneau teammates, Alvin Poblacion and Al Barough back in the field. Alvin was 6th in this race last year, so it was a good situation to try something. If we got reeled in, then my teammates would have had a free ride and would be in good shape to counter attack.  With two people in the break it is different than a TT because you get that little recovery each time when you aren’t pulling and that lets you go that little bit harder.  Then once I was on my own, it was very much TT mode – you try to get as low and aero as possible and really keep the effort steady. It was touch and go right till the very end. I only got one time gap from the pace car, and that was with 20 miles to go when he told me the gap was 90 seconds. By the time I crossed the line they had pulled the gap down to only 5 seconds. So I got very lucky. Alvin, my teammate, also took 4th, which was pretty sweet too. It’s been great racing with CRCA BH/Garneau this year with such strong teammates. It is a nice vibe, everyone races a lot and it helps you to stay pumped up and keep developing when you are around guys who are fast and experienced.