Great day of criterium racing on the full course yesterday at Grant’s Tomb with all fields attracting strong riders resulting in very competitive racing in all fields.

In the Men’s P/1/2 field, NoTubes were the early aggressors with 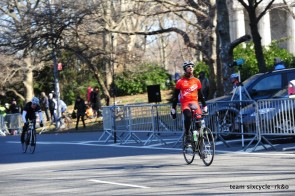 Brian Hill (Stan’s NoTubes/AXA Equitable) and Tony Hall (Champion System p/b Stan’s NoTubes) going from the gun and immediately getting a 20 second gap on the field.  With Axa teammates moving to the front of the peloton to protect the gap, the breakway maintained text-book  consistency as they worked together and stayed clear of the field.  But with 7 laps to they were joined by a group of three who bridged up.  Crossing the gap were Joey Rosskopf (Team Type 1 – SANOFI) and Nick Rogers (160over90 p/b Vie13) who brought Clayton Barrows (Stan’s No Tube’s/AXA Equitable) with them to put two AXA team mates in the now five man break.  All five worked together for the remaining laps until the inevitable attack on the last lap.  Despite the two man advantage, AXA was unable to take advantage and ultimately Rosskopt took the win over Rogers and Tony Hall.  A great effort by Tony.  (Its clear that both the AXA and Champion System teams read my pre-race briefing and almost pulled off my race plan for them)

The Women’s field stuck together for the entirety of the race despite a few attacks be various riders.  Fabienne Gerard (Eumaeus Asset Mgmt-Fuoriclasse) won a Prime sprint and finished 5th ahead of of Beth Renner (Innervation Fitness/Stan’s No Tube Women’s Racing Team) in the field sprint.

The Men’s 3 race ended with a break of three getting a short but sufficient gap, with Joe Jacobs (Speedwell Racing) out sprinting pre-race pick Soren Jensen (Rapha Racing).

The Men’s 4 race also ended with a field sprint.

The team and Jim Boyd scoring from yesterday’s race is summarized here.

With two races into the team cup, the A field sees Champion System with an early lead in the A field while the Women’s and Men’s B fields are still relatively wide open.  See updated results for the Team Cup and Jim Boyd.

Full results of all races is included here.

Next CRCA race is next Saturday, March 17th.  Note that there is no C field next week.  We will be conducting a race men’s race clinic instead which is sold out.