Evie Moves Up at Nature Valley 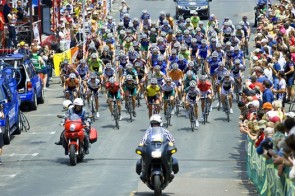 With a 12th place GC finish in the NRC Nature Valley Grand Prix Stage Race, Evie Stevens, CRCA/Radical Media proved she can hang with the top female cyclists in the country.After winning all of the big regional races in the Northeast, Evie went to Minnesota to battle at the NRC level.

Evie got off to a great start finishing 14th in the opening 10K Time Trial. Finishing 1:05 behind Beijing gold medalist Kristen Armstrong, only one other rider had a gap on Evie.

In the opening night crit, Evie hung on to finish with the pack and keep her GC position.

In Thursday’s road race Evie moved into 8th in GC as a bunch of the rider’s ahead of her were caught in a crash.

Again in Friday’s crit, Evie put in an effort to maintain her 8th place GC spot.

Looking to move into an even higher GC spot in Saturday’s road race, Evie found herself caught in a crash and had to fight hard to get back up to 27th after entering the closing circuits behind the field. Evie could kick herself for not going with the break that ended up sticking. Then again, Kristen Armstrong would have moved quicker to reel in the break if Evie, closer in GC contention, went with the break. Armstrong did an amazing ride to single handedly gain time on the break to hold onto the GC lead. At the end of the day, Evie fell to 17th in GC.

But she bounced back in the final day’s crit which featured a monster climb and a scary downhill. On each lap Evie passed everyone up the hill only to fall back on the downhill. In the end she took 9th, only 20 seconds behind the 3 person break led by Kristen Armstrong and moved up to 12th GC.

While still feeling her way,the Nature Valley race only marked Evie’s one year anniversary racing, Evie shows the speed, power and endurance to keep up with the best women in the country.