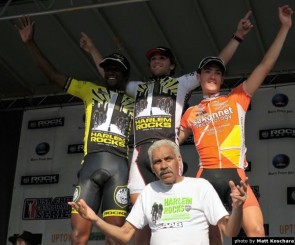 Also in 1973, aware that there were no intramural sports for girls in the schools, Dave held a Double Dutch demonstration at Harlem’s I.S. 10 for the NYC Board of Education. The Board of Ed loved it and from the late 1970s through the late 1980s, Double Dutch was an intramural sport in the NYC public schools, with the championships held in Lincoln Center. Today, the big event is the Holiday Double Dutch Classic at the Apollo Theatre which attracts teams from around the world. “Rhythm in the Ropes,” a documentary filmed at the 2004 Holiday Classic and shown on ESPN2, won the Emmy for most outstanding sports documentary.