For the second year in a row, a CRCA woman has won the GMSR Women’s 3/4 race. Even better, this year CRCA swept all three podium spots with Dara Kiese, CRCA/Radical Media, first, Donna McMahon,CRCA/Radical Media, second and Fabienne Gerard, CRCA/Teany third. It is very satisfying to see the really strong base of women’s cycling in the club. Dara has written a report on the GMSR race. 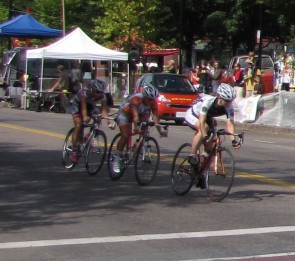 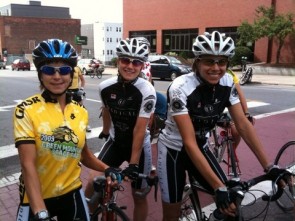 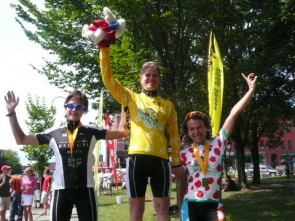 Three years before I started racing, I heard about the GMSR. I would check it out online, I rode some of the roads, I would hear reports from friends….it was one of the main reasons for me to take up racing. Sentimental, I know…but being there was a dream come true.

The TT was hard. What can I say about a TT? 5.7 miles. Hilly. Headwind. Heart rate. Go. The hardest part was after the crest of the final climb because there was still so, so far to go! After feeling sluggish on the flats because of the headwind, I was surprised to get second place, right behind my teammate Donna McMahon and within seconds of my other teammate in the 3/4 field, Erica Adelberg. We were fortunate to start the rest of the race with an advantage—something I wouldn’t fully appreciate until later.

There were no surprises in the circuit race—30 miles and only one major climb. The group stayed together until the end, with a point sprint and QOM climb shaking up the pace a bit. Knowing that I couldn’t win the QOM, my goal was to maintain my pace without wasting energy, but to stay close enough to the leaders in case they broke away after the climb. As a team, we went into the race with the goal of getting Erica a placing bonus, but the strong headwind foiled our well-intentioned lead-out plans. We finished with the pack, with Donna maintaining her lead in the GC, I was passed by 2 riders and bumped down to 4th and Erica was in 7th place. It wasn’t until reading the results that I began to understand how critical every second was.

The road race seemed like THE day that would determine the whole thing. 75 miles, some long climbs, and a very tough finish at the top of a steep Ap Gap. Going in with all three Raddies in the top 10, we hoped to be in any breaks and hoped that we had our climbing legs. The race started at an easy pace in anticipation of the first climb at around mile 20—Brandon Gap. All I remember about Brandon Gap was the last kilometer or so—steeper, faster pace, smaller group. Far behind Fabienne Gerard (TEANY; QOM) and Laura Ralston (MIT FXDD; the other contender for QOM), there were a few of us vying for 4th-6th places, maybe more. We had a small group of 8-10 riders for the descent and fully expected to keep a break, but we were neutralized for several minutes because of a terrible crash in an earlier race which brought the whole field back. We stayed together in the long valley section to Bristol Gap despite some attacking/counterattacking. It seemed that the race was coming down to Ap Gap, the steepest, 3 mile-climb. Starting at Baby Gap (the 2.5 mile climb prelude), I sat on Fabienne’s wheel near the back of the pack and was patient. I had confidence in her ability to get to top of the mountain fast (she was QOM after all). Steady as can be, she slowly increased her pace as others dropped off the back. Donna was already out ahead at the 500 meter mark (wow is she STRONG. she won by 22 seconds), when Laura picked it up forcing us to work harder. I had wanted to pass Fabienne close to the finish, but she was too fast for me, pulling away before the line. I felt content with 3rd place, glad that I hadn’t made any mistakes and had done my best.

The criterium in Burlington turned out to be a total surprise. As a team, we thought that we were in a great position to have at least one rider on the podium. I had thought that Donna was unbeatable with her huge 38 second lead. I was very nervous about losing my 2nd place, with Fabienne and other good sprinters just a point sprint away from overtaking me. With a neutral start, I was taken aback when two riders shot to the front (Genevieve Bourgeois, Eva Devinci and Anne-Marie Morin, Garneau Club Chaussures)—in retrospect, it was nice of them to give us a warning that they were planning to go right off the bat. When the car pulled away, so did they and I made sure that I was with them. I didn’t think that a break could stick for the whole race and waited for the field to catch up—and my fellow riders expressed their annoyance with me. I went for all the sprints and after 20 laps finally knew that I had secured 2nd place because of the sprint time bonuses (reductions?). It didn’t cross my mind that I could win the GC until the announcer talked about how smart my tactics were. Huh? I had no idea what to do! I wondered if I should slow down so that Donna could catch up, but clearly my teammates on the sidelines didn’t think so—I didn’t know where Donna and Erica were or how well they were riding that day and a field sprint at the end seemed risky. My cornering started to improve during the race, but still hurt me for the final sprint. I was over-confident that I had time to pass them after the last turn, but couldn’t do it—regardless, the two other riders had worked hard and deserved the win, and I won the yellow jersey. CRCA riders brought so much to this race—great competition, smart racing, and a reassurance that we were looking at for eachother in the pack. Good fun. I can’t wait until next year.