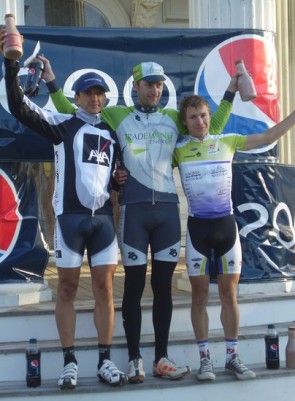 As for my goals. There are no races I’m gonna ‘peak’ for. There are races that I’m more likely to do well at so there will be some kind of a focus in training for those, but the goal is to be good the whole season. I think people get confused about the way some big pro tour riders train, but most riders can’t afford to bank on one goal and need to be fit year round.

Here is how I experienced Battenkill

We went to Battenkill with the intention of getting a podium finish at the very
least. Anything short of that would be a disappointment. We had a strong team of 9 guys
going into the race (Barrows, Hollenbach, Hurst, Jaskiewicz, Loehner,
Margarite, Minturn, Whitman and myself). Anyone one of us could finish well, so there were really no leaders for the race.

The plan was to have someone in the early move and of course in the final
selection. Most of us have been racing for a while, so there usually isn’t
any need for big plans and talks, as everyone knows what to do.

All the guys were covering early moves, except for me. I was nowhere near
the front for the longest time. I was just not feeling or racing well for a
big part of the race. My head wasn’t in it. It was an awful feeling. I did not feel like riding hard andI could not move up in the field. I even managed to get tangled in a crash. I did not go down, but just stopped on top of Gabe Loyd’s
bike. It took a while to get my bike untangled, put my chain back on and get
going, so I had to chase for few minutes. That kind of thing usually sparks me
up, but it didn’t this time.

Thankfully John Minturn got away with one rider from Embrocation.
Minturn dropped him after a while and was in a solo break for
about 40 miles which made racing a little easier for the rest of the team since we did not have to be as aggressive.

Even without having to do much, I was still not riding well and was getting more and more angry at myself.

Then I got dropped on the main climb, (Bunker Hill Rd I think) It was not like I
missed the break either, I just got dropped. There were at least 40 riders ahead of
me when I got over the top. The climb is pretty blurry in my memory, but I
thought that we had at least three guys in that front group. Bad for me, but
not too bad for our team. I was really not happy about getting dropped, and
it finally ignited some fight in me.

I started chasing back and I could see that
riders were still getting dropped from the front group. So I’m picking up
one after another until I see our jersey. Now, I’m thinking only two teammates
left in the front group.

After a little while of riding with my teammate and one more rider I
see another AXA jesrsey. This left only Peter Hurst in a group of about 30
riders (BTW Peter flew by me on that climb). This was no good to only have one guy from AXA up there.

It was time to hit the panic button, which we did and managed to bridge back on
the downhill.

While I’m trying to recover I’m thinking, “what the f… just
happened on that climb and how the hell am I gonna do this for another 30 or
so miles?” People started attacking left and right I countered one of
the moves and the field just let me go.

Problem is that it was on a straight wide road with a very stiff headwind. I’m right there in front of everybody not really going anywhere. But I figured I might as well ride hard and see
what happens. After a while 4 guys bridged to me. Steve Tilford from TradeWind Energy, Justin
Lyndine from Bikereg, a Met Life rider and some French-Canadian rider from a
team I have never seen before.

We worked well together except for the Canadian guy who was trying to skip pulls. I personally have a problem with this kind of riding so I made sure I made his
life as difficult as possible and was encouraging the other guys to do the
same.

We hit the last climb with a minimal gap over small group of chasers. I knew
it was going to be close. Justin was taking some serious pulls and this droped the
Canadian guy and the Met Life rider. When we are almost over the top of last small
climb, a select group bridged to us. (Jamie Driscoll from Jamis, Will
Dugan from Team Type 1, Josh Dillon from Bikereg, CCB rider and Tilford’s
teammate Brian Jensen).

Of course Josh attacks immediately and splits the group to pieces.
At that point I knew I just had to dig deep and get over the top with them
and I would be in the mix for the win.

We regrouped over the top of the climb, but with 5k to go, the attacks started up again and more riders are getting dropped and I realized I was the only guy left from the original break. I was really hurting at that point and just riding defensively. I was able to stay with moves but I knew that there was no way I could go alone for even a few kilometers.

I’m pretty confident with my sprint from small groups so I was in a decent place for the finish . But then somehow going into the last kilometer it was only myself, Will Dugan and Brian Jensen (who I don’t know and who did not do much up until that
point).

So I’m thinking Will Dugan is the best sprinter here and so the best
wheel to be on for the sprint. But Will hesitated as Jensen jumped out of the
corner and it was all Jensen needed to win . I came around Will, but just barely. Photo finish for second. Clayton Barrows finished 12th and Mike Margarite 13th.

It’s always tough to swallow when you get second, but considering how I felt
and how hard the race turned out to be I was pretty happy and the team was
satisfied with the result and the way we rode together as a team.