Another summer weekend, another big race, and time to dust off the Race Predictions for this weekend’s Lou Maltese Memorial. Should be a gorgeous day for enough loops around Central Park to make you dizzy. We’ve crunched the numbers (or rather let the www.road-results.com computers do it), and added our own personal views to make for some predictions that are interesting, good, bad, and perhaps ugly. 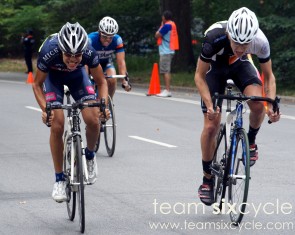 Let’s start with the women. The field isn’t huge but there is some decent talent that will make things pretty interesting. The supercomputers, or you know, the Access database – I am dying to know! – is putting Colleen Gulick from Team EPS/CSS p/b Shebell & Shebell in first place, which is not unlikely given the fact that this New Jersey cyclist has been all over the country and the region, in big races, with decent results. Victoria Brumfield of CRCA/Radical Media, a hometown racer with a load of good results this year is predicted for second, and Caryl Gale of CRCA/Cloud Racing p/b Ride 2 Recovery is sitting in third. With a huge prize pool for the women, I wouldn’t be surprised to see some last minute additions to the race roster, making this prediction meaningless, but we are going to choose BrittLee Bowman of CRCA: Stan’s NoTubes p/b enduranceWERX for the win. The race predictor only has her in fifth, but in this field I can’t imagine a big break getting away, and my pick for the sprint would be on Britt. I hope that for this prediction she includes me in the post-race muffin and coffee purchase!

This field was added at the last minute and so far there are only three people signed up. Come on, Cat 5’s, you’ve got to be kidding me! All you need to do for an upgrade is show up for 10 races, you might as well use this as an opportunity to get some points. At this point we will randomly select Philippe David as the winner, but I hope I’m wrong!

I like the fact that the Men’s 4’s are keeping it interesting. With over 50 racers registered so far, this should be a good and lively race. I also like that an out of town racer is predicted for the win by Road Results! Let’s see what these guys can do racing at 5:30 am, which is not for the faint of heart. Jesus Martinez of Triangle Cyclists/South Shore Bike Shop is predicted by the computers for the win, with the unattached Johnie Way in second, and Erick Fernandez of CRCA/Dave Jordan Racing predicted for third.  As much as we would like to pick Wouter Hoogenboom from CRCA/Dave Jordan Racing for the win, because his name is awesome, I have to say that I think it’ll be his teammate, Erick Fernandez. He has been looking strong and has some decent results recently.

The Cat 3 race should also be relatively active, interesting, and large with 54 racers signed up. David Taylor of CRCA/Eumaeus Asset Management – Fuoriclasse is predicted by Road Results to win, which is not unlikely. Rounding out  the top three predictions are Baris Aytan of CRCA/e2Value and Scott Gregoire of Deno’s Wonder Wheel Cycling.

The field is pretty deep though – Noah Gellner of CRCA/W&D Racing – NYC Velo always has a decent sprint, and even though Corey Morenz of CRCA/SixCycle-RK&O has been off the bike recently, he did destroy me in the park doing some ‘easy’ loops so he may be pretty fit. All that being said, we are going to go off the reservation a little, and predict that it’ll be Steve Magyera of CRCA/Foundation in a break.

This is the money race. We have 80 entrants so far and I am told there may be a few more added to the roster over the next day. This is pretty exciting, and the list of teams is stacked – CRCA/Foundation, CRCA/Blue Ribbon-Pennell Venture Partners, Stan’s NoTubes p/b Proferrin, CRCA/Weather Channel Cycling Team, CRCA/Lupus Racing Team, the list goes on. Can’t wait to see how this plays out. With a minimum of four racers per team, I am hopeful that the team dynamics are interesting and will influence the outcome. The added element of Harlem Hill primes with a decent amount of prize money could also change the tactics used.

It is not surprising that Stalin Quiterio Cuello of CRCA/Dave Jordan Racing is predicted for the win, as he was second at the Harlem Crit following a legit German pro. That would not be a shocking outcome. Rodrigo Echeverri of HighGear/Trek/WW/Watchung Wheelman – that team name is a mouthful, my goodness – hasn’t raced much in 2014 but apparently did well enough in 2013 to make him a factor, predicted by the computer to be in second. And Barry Miller of the Van Dessel Factory Team is predicted to finish in third.

There are a number of other contenders that will make things interesting, but considering how he was able to ride away from the field at Bear Mountain, our prediction for the big W goes to Michael Margarite of CRCA/Weather Channel Cycling Team. Considering the length of the race and the strength of his team, this probably isn’t too far-fetched.

Should be a fun and interesting day in Central Park!

June 26, 2014
Team Scoring and Other Info for Sunday’s Lou Maltese MemorialMinutes of the June 3, 2014 CRCA Board Meeting
Sponsors